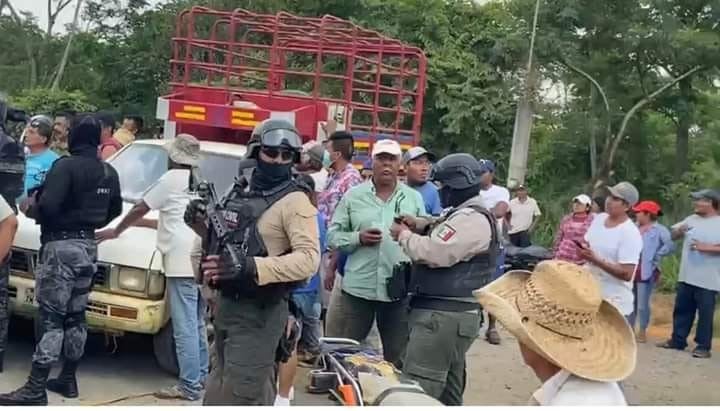 Cultural Survival joins members of the Abasolo del Valle Indigenous community in denouncing violations of their rights related to work carried out by Petróleos Mexicanos (Pemex) on their territories. The Mexican state-owned oil company began operating in 2011 in Abasolo del Valle, southern Veracruz, Mexico, but has not paid the owners of the land or fulfilled the promised compensation. In the early hours of Saturday, July 23, 2022, after a series of demonstrations and attempts at dialogue by community members, police in face coverings broke a blockade using their weapons and excessive force. Two people were wounded by bullets and one person suffered a fracture after a patrol ran him over with a police cruiser.

According to testimonies from authorities and members of the community, Pemex did not inform them about the risks and consequences in general that the work would bring to their lives. After obtaining permission from the community, without going through a full consultation process, to carry out the exploration years ago, Pemex has not disclosed the progress of the work to the community, which has only witnessed the continuous passage of company vehicles. Therefore, it is likely that the right to Free, Prior and Informed Consent, which must be obtained in all work related to Indigenous communities, has been violated.

Pemex currently has three oil wells in Abasolo del Valle, one in the exploration phase, another about to start exploitation work and one more already in the works. Last month, the community decided to block access to vehicles to the macroperas - onshore oil platforms - to exert compliance with previous agreements. After the residents stopped a patrol, the state security forces, and the municipal police forcefully made their way through the blokadeblockadesleast two occasions.

The community has sent a written request to different departments and offices of the Mexican government and human rights entities. Their main complaints are for damage to their roads and water sources, and for the danger the constant traffic of large vehicles poses. According to reports, some water wells dried up after the drilling was started by Pemex. In addition, due to the narrowness of the roads, the constant flow of company vehicles puts community members’ lives at risk, due to their size and the flammable material they transport. A few years ago, there a dangerous incident took place when a pipe caught fire and about two hectares of prairie land were burned.

Cultural Survival calls on the Mexican government to respect, protect, and fulfill the rights of the Abasolo del Valle community now during the current dialogues and for as long as work continues on their territories. We remind the Mexican State of it obligations under Article 19 of the United Nations Declaration on Rights of Indigenous Peoples which states: “States shall consult and cooperate in good faith with the Indigenous Peoples concerned through their own representatives’ institutions in order to obtain their Free, Prior and Informed Consent before adopting and implementing legislative or administrative measures that may affect them.” The duty to consult is required before “the undertaking of projects that affect Indigenous Peoples’ rights to land, territory and resources, including mining and other utilization or exploitation of resources,” as Article 32 states.