We are excited to share the final piece of our new vision with you on our programmatic priorities that build off historical, existing, and emerging work at Cultural Survival. Our current programs will continue as well as evolve to incorporate our new strategic framework, building on our ongoing work through the application of the holistic, four-pronged strategy of Grantmaking, Capacity Building, Advocacy, and Communications. Our programmatic priorities include:

Indigenous women have long been marginalized and continue to face multiple forms of discrimination based on their ethnic origin, gender, economic, political, or societal status or class, disability, and location. However, Indigenous women are the ones who carry millenia-old traditional knowledge about the land and biodiversity that is embedded in their cultures and languages. It is the knowledge that has been passed down from one generation to the next that makes Indigenous women the original storytellers, the keepers of their traditions and oral history, natural community leaders, and the best experts of their own landscapes. Indigenous women are also leaders in the global Indigenous Peoples’ movement and the women’s movement. For many years, Cultural Survival has prioritized projects that center women and engage womens’ and girls’ leadership, and we will continue working to uplift Indigenous women according to Indigenous values and protocols self-determined by Indigenous communities. We strive to support Indigenous women in being the decision-makers and protagonists of their own stories and taking the leadership and participation roles that they choose and deserve to take.

Young people hold the power to shift the dynamics of the world. If we want change, we must provide support to Indigenous youth leaders to make that change possible. Indigenous youth in particular continue to face racism, discrimination, and marginalization, and lack access to opportunities, networks, and resources. However, when they have a sense of belonging, a sense of empowerment to change the conditions that affect them, and a strong cultural identity, they become resilient, powerful individuals for their communities. The participation of our Indigenous youth is crucial in strengthening self-governance, protecting land rights, fighting climate change, containing the loss of biodiversity, restoring ecosystems, and stewarding our cultural heritage. Cultural Survival is uniquely positioned to provide the necessary support for Indigenous youth to successfully carry out this work.

Moving forward, Cultural Survival will provide more holistic programming by deepening our focus on Indigenous women and youth as a cross-cutting theme through our previously-outlined four-pronged strategy of advocacy, capacity building, communications, and grantmaking. By developing a comprehensive gender policy and Indigenous Peoples’ principles and policies, Cultural Survival can not only enhance our own processes and decision making but also affect our institutional relationships with partner organizations, partner-grantees, civil society groups, movements, NGOs, philanthropic institutions, and government agencies. 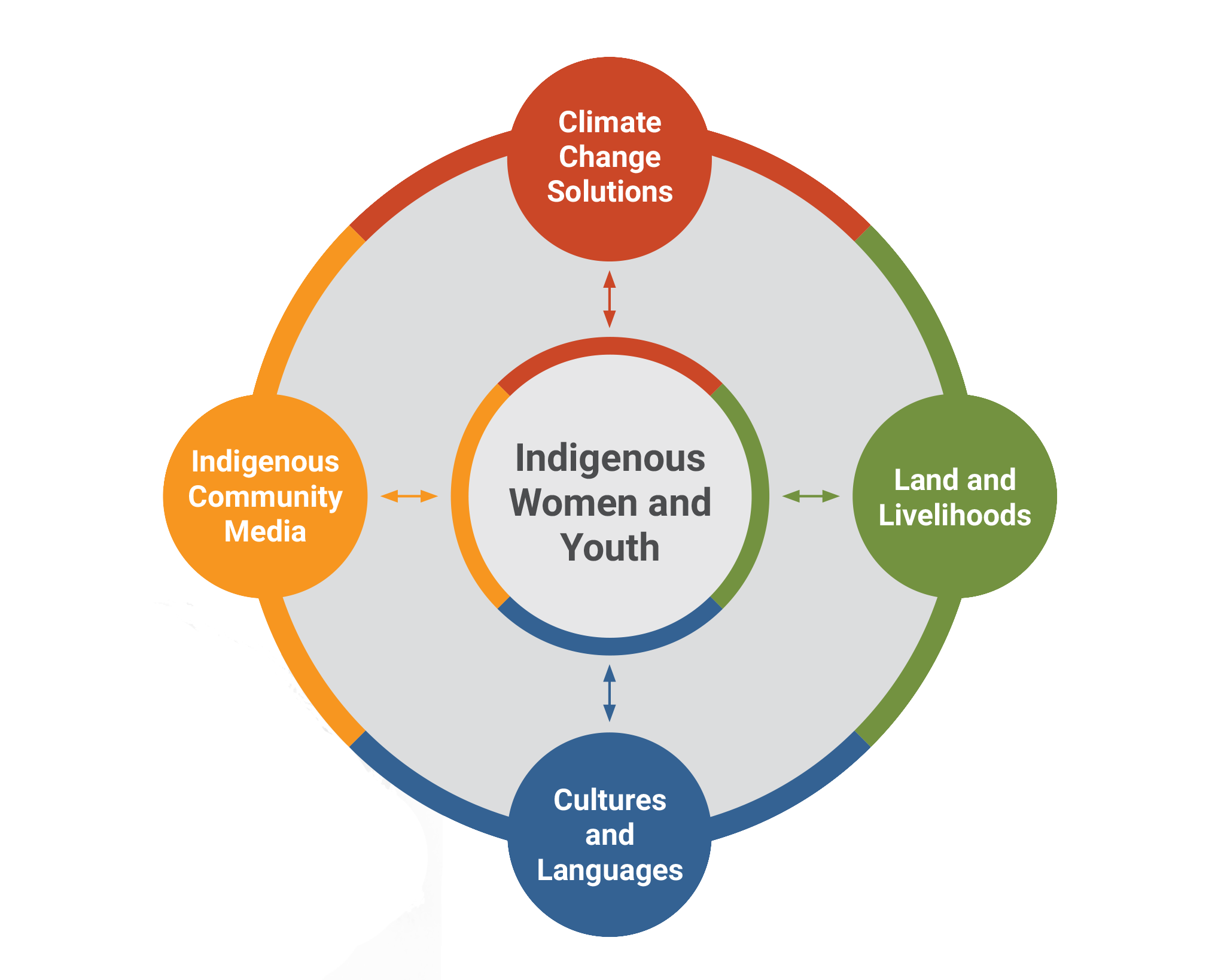 Climate change came up as one of the top issues of concern for Indigenous Peoples, and it is directly connected with the issue of land rights. Climate change is becoming the number one risk for Indigenous Peoples globally, as Indigenous communities are disproportionately affected by its impacts and are among the first to face the direct consequences. In the Arctic, communities are suffering from the receding ice, melting permafrost, changing weather patterns, and increased storms, as well as changes in species and animal behavior that impact their access to their subsistence resources. In the high altitudes of the Himalayas, people depend on the seasonal flow of water from glaciers. Unprecedented melting is creating more water in the short term, but less will be available in the long term. Communities across the globe, from Siberia to the Amazon, are affected by the ongoing raging fires.


Meanwhile, an abundance of research has demonstrated that Indigenous Peoples hold solutions to climate change. Although Indigenous Peoples around the globe represent just 6.2 percent of the population, they manage or hold tenure over 25 percent of the world’s land surface, support about 80 percent of the global biodiversity, and manage at least 24 percent (54,546 MtC) of the total carbon stored above ground in the world’s tropical forests, a sum greater than 250 times the amount of carbon dioxide emitted by global air travel in 2015. Areas titled to Indigenous communities have been shown to store 36% more carbon per hectare than public conservation land. According to an analysis by the World Resources Institute, by securing Indigenous land rights in Bolivia, Brazil, and Colombia alone, we could avoid the release of up to 59 megatons of carbon emissions every year — the equivalent of taking 9 to 12 million passenger vehicles off the road. The 2019 IPBES report found that between 65 to 75% of the earth’s surface has been significantly altered by human actions. However, on average, these trends have been less severe or are avoided entirely in areas held or managed by Indigenous Peoples and Local Communities. Leading climate researchers have concluded that “[there is] an urgent need to make collective tenure security a critical part of emission reduction strategies. Empowering forest peoples to continue their historical role as stewards of the environment is essential for stabilizing Earth’s climate.” When Indigenous Peoples have rights to their lands, they are able to steward these lands in ways that prevent fossil fuel extraction, maintain carbon-capturing forests, ensure soil regeneration and carbon capture through traditional agriculture and agroecology, and protect biodiversity. The gap between recognized and unrecognized land rights points to significant opportunities to scale-up the protection of Indigenous lands.


The science is clear—Indigenous communities are critical in reversing the climate crisis. Indigenous Peoples have long been viewed as victims of the effects of climate change, but in reality they are agents of climate solutions and environmental conservation. The consequences of climate change in Latin America may differ from those in Africa or Asia, but one thing remains true: local resilience requires local traditional knowledge. We cannot address a global crisis without focusing on local, place-based solutions. Supporting Indigenous communities at the local level supports and enriches the ecosystem in that region, and the health of that regional ecosystem impacts that of surrounding ecosystems. This strengthens the interconnected and interdependent web of ecosystems (or web of life), and Indigenous Peoples’ traditional knowledge is the catalyst for the climate change mitigation our world desperately needs. From traditional Indigenous home design to traditional fire management, from agro-pastoralists to agroecology and agroforestry methods, Indigenous Peoples have lived in reciprocal balance with their environments for millenia and continue to do so up to this day.

We envision this work as strengthening Indigenous Peoples’ self-determination, sovereignty, land defense, land titling, their traditional ways of managing natural resources, biodiversity conservation, and the proliferation of traditional economies and livelihoods. This thematic thread will also be closely tied to the emerging theme of climate change solutions, as we believe that Indigenous Peoples’ management of traditional lands and territories provides climate and conservation benefits for all.

The theme of Lands and Livelihoods will cut across our programs and strategies. Our advocacy work will support Indigenous stewardship of lands and territories by elevating local struggles to international spaces. Providing training on land rights and tenure will be a key component for our capacity building strategy. We hope to secure additional funding for our Keepers of the Earth Fund to support community-led work related to this theme. Our current Bazaar program would fall under this thematic thread, as it provides an opportunity for traditional artistic/economic occupations to survive and thrive within their homelands. Finally, we will deploy our Communications to fully support Land and Livelihoods through content development and strategies in order to widely disseminate stories that uplift this work.

Cultural Survival’s work to promote cultures and languages has been a historical priority since its founding and is directly connected to our work on community media, our radio programs, our magazine, our Bazaar, and our communications work in general. Supporting cultural and language diversity and revitalization also directly supports biological diversity and conservation. Indigenous Peoples’ traditional knowledge is key to continuing protecting the land we’ve inhabited for millennia. Our languages are essential for maintaining and transmitting our traditional knowledge to future generations. We believe in the sacred and interdependent relationship between the land, its peoples, and their cultures; the erosion of culture leads to the erosion of biodiversity, land, and soil.

Cultural Survival will continue to emphasize the importance of culture and languages in our advocacy work by engaging with the World Intellectual Property Organization (WIPO) and further advocating for and resourcing a cultural pillar in addition to the economic, environmental, and social pillars of sustainable development at the UN level and in other spaces. CS will focus its communications work (including our magazine and website podcasts) to uplift stories of Indigenous artists, culture bearers, and language leaders to further advocate for cultural and language revitalization. Our capacity building component will support artists through our Indigenous Artist Institute, and our grantmaking will support arts and culture through grants for our partner communities. Our current Bazaar program and other emerging strategies will fall under this thematic thread to create Cultural Survival artists residencies and to support creative forms of self-expression such as performance arts, painting, sculpture, dance, poetry, etc. Finally, as part of this theme, CS will continue its healing and decolonization work from our diverse Indigenous perspectives.

Our Indigenous Community Media has been the stronghold and identity of Cultural Survival’s work for almost two decades, with more than 130 Indigenous radio partners across Latin America, in Southern and Eastern Africa, and in Nepal, India, and Bangladesh. Our Indigenous Rights Radio program is also part of our Indigenous Community Media work, with a network that includes 1200+ radio stations and broadcasts to an estimated audience of between 11 to 50 million listeners, most of whom are Indigenous and live in rural areas where community radio is often the main (or only) source of information.

We view Indigenous Community Media work both as a goal in and of itself to support the right to freedom of expression and as a vehicle to achieve the larger goal of self-determination as prescribed by the UN Declaration on the Rights of Indigenous Peoples. Cultural Survival supports Indigenous Community Media through various means: by advocating for Indigenous Peoples’ freedom of expression and their right to access their own forms of media; by resourcing communities’ media and communications work through small grants; by providing training in media and content production, offering technical support to radio stations, promoting the use of technology, advocating for a gender balance, and more; by highlighting the work of Indigenous media through CS communications on our website, social media, and CSQ; and providing news, culture, and human rights related radio content to our radio network via our platform Indigenous Rights Radio.

The thematic area of Indigenous Community Media will include our current programs and strategies: Community Media, Indigenous Rights Radio, and Communications (social media, Cultural Survival Quarterly magazine, and our website). Possible areas of expansion include online radio and other community media such as TV, audiovisual materials, print media, and new technologies for communication and connectivity for Indigenous communities such as wifi and broadband. We have already started the production of podcasts in Spanish. We intend to invest more into podcast production in English, Spanish, and Indigenous languages. One of the recommendations that came as a result of the survey is to increase the use of Indigenous languages in all our communications and radio productions, which we will be emphasizing in our future developments in this thematic area.