Tanzanian Authorities and Police Have Begun Violent Evictions of the Maasai, for a Game Reserve in Loliondo Division of Ngorongoro District 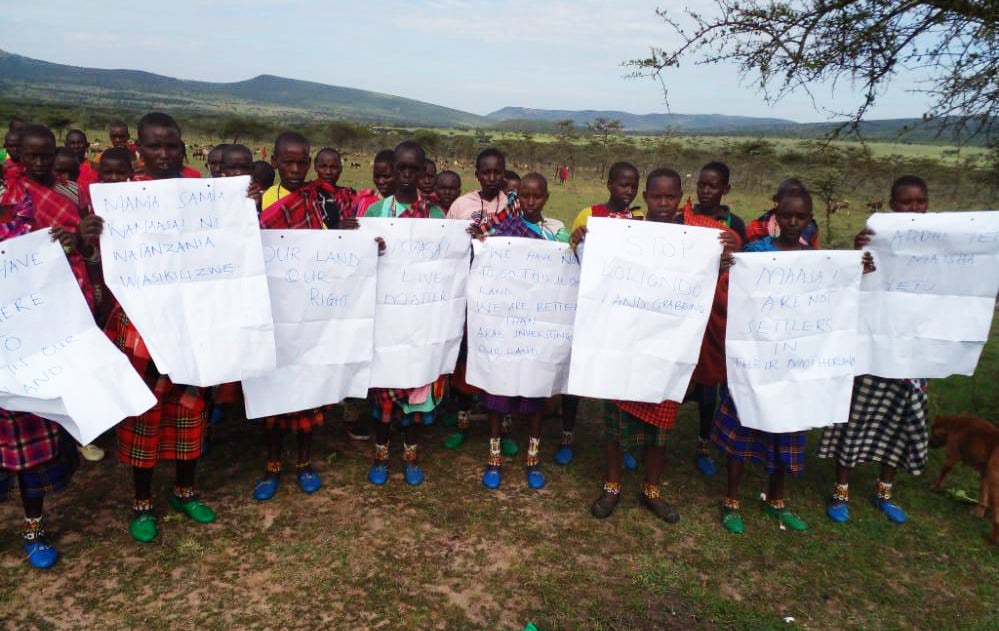 URGENT ADVISORY FROM A GROWING CULTURE

On June 8th: “dozens of police vehicles from the anti-riot (Field Force Unit) arrived in Wasso town of the Loliondo division of Ngnorongoro district to demarcate a 1,500 km2 area of land as a Game Reserve” — Oakland Institute Press Release / *see below*.

On June 9th: "Maasai communities gathered in several locations, including Ololosokwan and Kirtalo, to protest against the police invasion." | Media on June 9th

Quotes from sources on the ground (received June 10th): "The government have send military to our land and now are forcing peoples to move and their using fire bullets to wound people. This is urgent…we need your help.” — Source remaining anonymous for security reasons

- In Loliondo 10 people wounded by bullets: 8 women, 2 men and 1 elder over 70 years old 2 men badly wounded. Names of the wounded have been documented, for safety concerns are not being released at the moment.

- Two persons were rushed for medical attention but the military blocked the road and hence access to hospitals.

Those arrested include village councillors / chairpersons:

Oakland Institute: The 06.09.22 - *Below Press Release* provides updated context on why armed police and authorities are evicting the Maasai

Down To Earth News: "Fortress Conservation: Tension in Tanzania’s Loliondo as troops move in to evict Maasai to make way for game reserve"

Oakland, CA — On June 8, 2022, dozens of police vehicles from the anti-riot Field Force Unit (FFU) arrived in Wasso town of the Loliondo division of Ngorongoro district to demarcate a 1,500 km2 area of land as a Game Reserve. The FFU and other forces have now set up camp in the Oloosek area of Ololosokwan and in Sanjan sub-village of Malambo.

The arrival of a heavy police force signals the government has moved forwards with plans to change the status of the Loliondo Game Controlled Area into a Game Reserve, which would trigger mass evictions of Maasai living in legally registered villages within the area. “Despite earlier pauses, the Tanzanian government is blindly moving ahead with plans to remove Maasai pastoralists out of their land to clear the way for trophy hunting,” said Oakland Institute Executive Director Anuradha Mittal. “International mobilization on these developments is imperative to help stop this disastrous and illegal move,” she emphasized.

Earlier in June 2022, the Ministry of Natural Resources and Tourism announced plans to change the status of several Game Controlled Areas to Game Reserves. In addition to Loliondo, Lake Natron, Lokisale, Longido, Mto wa mbu and Kilombero would no longer allow permanent residents and livestock grazing would be banned. On June 9, 2022, the Minister of Natural Resources and Tourism, Dr. Chana, arrived in the Arusha region to “inspect the activities of the Loliondo Game Reserve,"(link is external) signaling the decision to change the areas status had been made.

This latest threat is a continuation of past efforts to evict Maasai from their land in Loliondo for safari tourism and trophy hunting. The United Arab Emirates (UAE)-based Otterlo Business Company (OBC) — which runs hunting excursions for the country’s royal family and their guests — will reportedly control commercial hunting in the area despite the company’s past involvement in several violent evictions of the Maasai, burning of homes, and the killing of thousands of rare animals in the area.

As a Game Reserve, settlement and livestock grazing would be outlawed. Removing residents from this area would also violate the 2018 East African Court of Justice (EACJ) injunction, which prohibited the Tanzanian government from evicting the villagers, seizing their livestock, destroying property, or engaging in harassment against Maasai communities living in Ololosokwan, Oloirien, Kirtalo, and Arash villages. “While a final ruling from the EACJ is expected at the end of June, the government is willing to defy the court injunction, grab the ancestral land of the Maasai and hand it over to the royal family of the UAE for their hunting pleasures, indicating its ruthless disregard for its citizens, international law, and due process,” said Mittal.

Today, Maasai communities gathered in several locations, including Ololosokwan and Kirtalo, to protest against the police invasion. In light of this impending calamity, the Oakland Institute echoes calls made by local communities for international support and an immediate end to displacement and evictions.