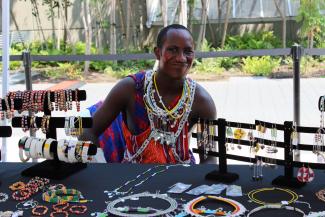 Isaya Oleporuo and The Warriors Organization have sold jewelry made by Maasai women from Oleporuo’s village in Tanzania at the Cultural Survival Bazaars for the past four years. A Maasai warrior and community organizer, Oleporuo was inspired to help found The Warriors Organization after organizing an initiative that successfully brought clean water to people in his village and the surrounding areas. The water project saved many lives, providing well water for over 3,000 people and diminishing the dangers women and children had previously faced walking 10 miles to the dam, sometimes encountering buffalo or lions along the way. The well required a solar panel and pump for the water. In order for the project to be a success, people needed to understand how to take care of the well. Oleponio, along with friends from Israel and New York, was inspired to find a way to enable Maasai people to learn skills while also promoting their culture.

The goal of The Warriors Organization is to build a community education center to teach people how to read and write while maintaining their culture for generations to come, according to Oleponio. One program that The Warriors Organization has developed is the Maasai Women’s Jewelry Project. In Tanzania, the dry season presents a challenge for many women. During the drought, men travel with the cattle and leave the women to support themselves and their children. The Maasai Women’s Jewelry Project empowers women to support themselves through this challenging time by making jewelry. Oleporuo sells the jewelry around the world, returning 100 percent of the profits to the women.

The women who make jewelry for the Maasai Women’s Jewelry Project are mostly widows or women who cannot depend on husbands, yet still must take care of their children. One of these women is Mosipa, a mother of 12. All but one of Mosipa’s cows died in the dry season, and one cow is not enough to take care of 12 children. To support her family, Mosipa tried to make charcoal, an option that many women turn to despite the dangers it poses to their health and the environment. Since Mosipa began making jewelry, she has earned enough money to feed her children and even send one of her daughters to school, allowing her to avoid being married at a young age. The point of this project, Lukumay says, is “to give the woman power, to understand that you can actually do something with your own life.”

Another artist is Namayani. As the oldest of six wives, Namayani is ignored by her husband and cannot provide for her eight children with the six cows she has. Like Mosipa, Namayani tried to support her family by making charcoal. Before the Jewelry Project, Namayani could not provide food or take her sick child to the hospital, and as a result was suffering from depression. According to Oleporuo, “Now she is a chairman in the group and is more than happy to continue the work on this project and try to bring in more women like her.”

The jewelry that is sold through the Maasai Women’s Jewelry Project is jewelry that the women wear themselves. Every color in Maasai jewelry means something: white is peace, blue is the sky, and green is the earth, water, grass, and trees. Since there are Maasai people in Kenya as well as Tanzania, beads and jewelry act as a passport, with white representing Maasai from Tanzania and red representing Maasai from Kenya. The jewelry serves as a reflection of Maasai culture and is used to represent love, customs, and relationships. “When I go to the Bazaar, it’s more like connecting with our world, to give people a chance to understand culture and share,” Oleporuo says.

Come to our upcoming Cultural Survival Bazaars in December in Boston and Cambridge. Visit bazaar.cs.org for details.