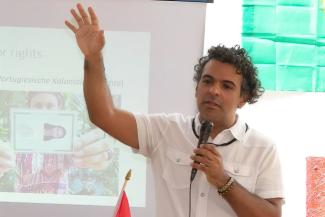 When the European colonial powers ruled our territories of Abya Yala, they implemented policies of oppression by ransacking, dispossessing, and enslaving mainly Black and Indigenous populations. In the last five centuries those policies were driven fundamentally by racism. Colonialism created a bureaucratic, institutional, and political process to discriminate and subjugate different ethnic groups. Centuries of colonial policies produced not only economic and social disadvantages, but also spiritual and emotional traumas for generations.

Colonial trauma, and therefore our liberation, affects all spheres of our lives: our being (who am I, and who is “the other?” How do I feel in relation to the other?); our power (who commands and who obeys? Who occupies the places of power? Who decides? Who leads?); our knowing (which knowledge is most valid? Who seems to have more authority when speaking?); and our doing (who has access to education, to the creation of valid knowledge, etc.? Who produces or co-creates? What is the impact of the making on the environment? Who benefits from the making?)

Colonization as a systematic source for structural racism, prejudice, and inequality persists because Western society constantly fails to recognize and acknowledge it. Decolonizing is a process that starts with identifying and analyzing the unequal power relations. When the subject matter is history, we must see it as a discourse, an ideological object that has an owner.

Decolonizing history is an exercise that we must start by questioning the story that is told, who tells it, and which voices have been silenced that still exist and live among us. Indigenous Peoples point out that the history of mankind is inseparable from the history of the other species, and is deeply connected with the planet (the Pachamama for some relatives of Abya Yala), Mother Earth.

The History of Mother Earth Has Not Yet Been Told

I have the privilege of being a teacher and working in an international school with students from many countries. The question I hear most from my 12- to 17-year-old students is, “who are Indigenous Peoples?” Because of the incredible diversity and various perspectives of Indigenous Peoples, a clear definition is hard to provide. Colonial powers diminish us and oppress us and have always labeled us. In Brazil, “Índio;” whereas in some places “Aboriginal” is used to describe Indigenous Peoples. Even “Indigenous Peoples” is not well accepted by many, as we are very different and diverse.

However, there are some common aspects that unite us under this provisional term. We are the survivors of the violent processes of colonization in our territories. We have a deep relationship with the Earth, which includes our responsibilities and original instructions to our environments. And we seek balance for all beings: humans, trees, rivers, and animals. This is demonstrated through the ancestral knowledge passed down from generation to generation in our communities, traditional knowledge that has sustained us through the centuries.

With my students, I discuss the differences between the stories told in books and the stories told by our ancestors: where we came from, who we are, what is our role in the natural world. Unfortunately, the stories of the didactic books are focused on the great achievements of the winners and powerful societies of mankind, rather than resilient and resistant populations.

One of the greatest acts of violence was the silencing of Mother Earth’s story. History, geography, and social studies books are deposits of Western monocultural knowledge, propagators of a system of values, a box of ideology that overpriortizes humans. Mother Earth is described as Terra Nullis, an “empty” and unexplored space, ready to be conquered. They were blind to the very being that feeds us all.

That is why uncountable numbers of species inhabitants of the planet have been vilified and massacred to the point of extinction. This crime has a name: ecocide. The same industrial logic of massacre was used on Indigenous Peoples, whose ontologies have always respected the planet as a living organism and an essential part of our relationships of kinship and life. Countless Indigenous Peoples have suffered a genocide for being different and for defending Mother Earth.

But, there is a light at the end of the tunnel. Since some scientists started to live and learn with us, this contact has opened the eyes of many in the West, sensitizing them to Indigenous worldviews. During the COVID-19 pandemic, the vulnerability of Indigenous Peoples and people of color has been escalated and exposed with the disproportionate deaths of those populations due to lack of healthcare conditions and inadequate education response, among other factors.

In the view of the Indigenous Amazonian Peoples, we need to “suspend the sky,” which is to broaden the horizons towards all, not just humans. We have a forgotten memory, a cultural heritage of the time when our ancestors were so harmonized with the rhythm of nature that they only needed to work a few hours of the day to provide everything that was needed to live. “And all the rest of the time you could sing, dance, dream: everyday life was an extension of the dream,” Davi Kopenawa (Yanomami) writes in “The Falling Sky: Words of a Yanomami Shaman.”

We need another dialogue in the educational field. We need an education that values other ontologies, other species as subjects of history and law, other languages, traditions, ancestry, spiritualities, and knowledge that are in the trees, which tell us the rivers, the Elders, the midwives, healers, activists, pajés (spiritual leaders), and shamans. They are holders of fundamental knowledge that should be in school in dialogue with sciences. Global society needs a new history, as well as new sciences, new laws, new justice, new societies whose narrative of what history is embodies multiple voices, a polyphonic knowledge that sees the planet and her realities with respect.

How to Start Decolonizing

We can start decolonizing in the classroom, at home, and basically anywhere by positioning ourselves not as individuals, but as part of a community. I regularly talk to my relatives in Brazil about ways to decolonize the academy, school, and institutions, seeking advice and directions. When I do my work, I do not do it alone. I need them; they watch over me. We take care of each other, we grow together. Relationality must also be at the heart of our work. Every day we learn from relatives, from students, from our ancestors. This gesture means that we are aware of the perceptions and feelings we have about ourselves, and how our perspectives are affected by the historical trauma of colonialism.

While working with non-Indigenous Peoples, we need to talk about the privileges, the device of amnesia that make many of the European and white people think that they don’t have anything to do with colonialism. We need to remember that problems are systemic. We approach that with a principle that our communities apply on a daily basis: relationality.

Terry Tafoya, cited by Shawn Wilson (Opaskwayak Cree), said, “Stories go in circles. &ey don’t go in straight lines. It helps if you listen in circles because there are stories inside and between stories, and finding your way through them is as easy and as hard as finding your way home. Part of finding is getting lost, and when you are lost you start to open up and listen.” Our students, colleagues, family, and friends should think about how to insert this content into our daily life. The decolonizing agenda belongs to everyone.

Five Ways to Decolonize History and Listen to Mother Earth

Descendants of Indigenous communities living in urban areas develop a strong and healthy identity when they have a strong relationship with the wider community, including humans, plants, and animals. Connect to the Indigenous communities in your region, meet local Indigenous leaders and movements, climate activists, and environmentalists. Attending Indigenous events in the city can help you feel strong culturally and increase your sense of belonging to a diverse and multicultural world.

2. Explore the power of images

Show and display photos and images of Indigenous Peoples from various continents, and caption them with important historical events of these peoples not only within schools or institutions, but also at home.

3. Create space and time for storytelling, ceremonies, rituals, and celebrations

Learn about traditional rituals and ceremonies from your own and different cultures. Learn the spiritual and cultural values of food, dances, chants, and clothing, for example.

4. Talk about Indigenous words among the lexica of English, Portuguese, and Spanish, and value the learning of Indigenous languages

There are numerous words in Portuguese and English with Indigenous origin, such as chocolate, pipoca (popcorn), tapioca, etc. Learn more about these and teach about them as they hold traditional knowledge which is connected to the true history of Mother Earth.

5. Have a decolonial agenda for the day to day

Discuss big topics. Encourage good and respectful discussions on decolonizing on a regular basis with the people in your circle. Talk about racism and discrimination, forms of bullying, and how to tackle them. Show young generations that activism for justice and equality is a matter for people of all ages, not only adults and people with money.

45-3 Decolonize: Returning to Our Ways of Being and Knowing 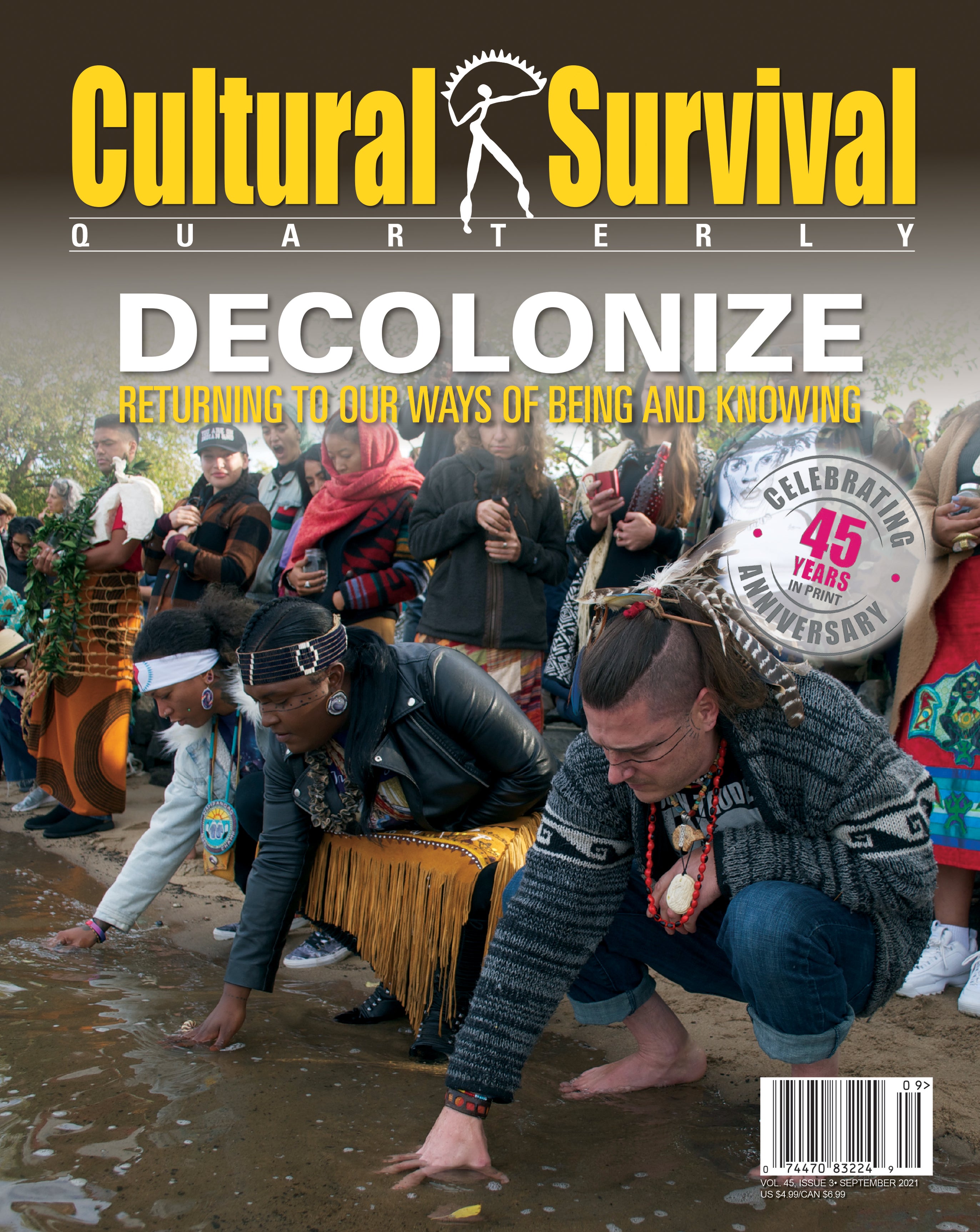