Defending the Blood of Mother Earth 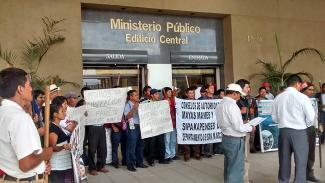 The blood of Mother Earth is the sacred river. Her blood flows giving life to the animals, plants, mountains, and humanity. To us, the Maya, we honor our sacred water for one full day every twenty days, calling on the energy of Imox, the water, to help give us life and to cleanse and nurture us. Before we plant our sacred crops, we hold ceremonies to call on the rain to nourish all the seeds and to ask for permission for this planting. At the end of our harvest, we again give thanks to our sacred waters for nourishing our sacred corn and all plant life and thank the water for giving us food and sustenance. Our bodies as humans are made largely of water, and since the time we are in our mother’s womb, we are connected with the water and the rhythm of grandmother moon. These are teachings that are passed down from our elders, the spiritual leaders, our medicine people, and the midwives. These are imprints of our ancestral DNA and the thread that connects us to the cycles of time and our environment.

The relationship between humanity and Mother Nature is complex and is rooted in the material and spiritual world and in all natural sacred elements. Our life is marked by the cycles of the stars, the sun, and the moon, and is grounded in the past, creating our present, and building our future. These ancestral concepts of our interconnection with the world continue to guide our people and are the foundation for our protection and defense of Mother Earth. These principles in how we interact with our lands and territories are the root of many of the conflicts surrounding development projects and the process of development projects in our lands and territories.

The relationship between the original peoples of Ixim Ulew and the Earth and the ancestral teachings that have been passed down through generations have helped conserve some of the largest tracts of natural goods found within our lands and territories. However, our people are not strangers to conflicts over natural sacred elements, as some of the worst massacres during the 36 years of war and genocide were precisely over natural elements like the rivers, as evidenced by such projects as the Chixoy Dam and the massacres that took place as a method to rid the area of the original peoples living on the banks of the river.

The scars of the conflicts have not healed, and in fact, the root of the struggles over lands, territories, and natural elements continues to shape conflicts today. Since the arrival of the Spanish, the western highlands of Guatemala have experienced tensions over lands and territories, and now new conflicts under climate change mitigation plans and renewable energy projects are affecting the peoples and communities of this region. One recent area of conflict is the municipality of San Pablo, which is one of 340 municipalities in Guatemala and is the ancestral territory of the Maya Mam nation located in the department of San Marcos. San Pablo contains many natural sacred elements, including 14 rivers and 8 streams. The abundance of natural elements in San Marcos generally have made it a target for the influx of megaprojects, including Canadian-owned open pit gold mine, the Marlin Mine. In recent times, hydroelectric projects such as Hidrosalá have also become part of the tension over development. This project is affecting 13 main communities, as identified in the Environmental Impact Assessment. Per the people of San Pablo, the community of San Carlos, which is further broken into 32 smaller communities encompassing several thousand Maya people, is particularly impacted.

Hidrosalá was approved by the National Commission of Electric Energy and authorized by the Ministry of Energy and Mines in May 2011. It has an energy potential of 15 megawatts and been approved for a period of 50 years. The start of construction for Hidrosalá was scheduled for 2014, but there have been several delays and extensions of the construction dates due to conflicts in the region. Hidrosalá has also been authorized by the local governing body of the municipality of San Pablo. However, community members have expressed that the authorization process was conducted without the consent of the local Maya communities. This situation has generated a series of human rights violations, including violations to individual and collective rights of the population of the municipality.

The ongoing situation has led community members to become organized for the protection and defense of their territory, a struggle that has become criminalized. There has been persecution, arrests, and imprisonment of traditional authorities. The specific targeting of ancestral authorities has occurred in order to silence the communities and instill fear in the people. Members of the Consejos Maya Mam Toj Milaja of San Pablo and te Txe Chman at the department level have been targeted, and as of today there are 10 political prisoners: Marco Tulio Pérez Pablo, Simeón Mauricio Guzmán, Bruno Emilio Solís Pérez, Nery Edilmar Santos López, Heriberto Evelio Santos López, Fausto Sánchez Roblero, Alfonso Chilel Hernández, Lorenzo Ramírez Rodríguez, Plutarco Irineo Clemente Pérez, and Maria Maribel Diaz Gomez. Tata Oscar Sánchez Morales, traditional Maya authority, was arrested and imprisoned on August 4, 2016 on charges of kidnapping, but was released on October 18 and will continue fighting his case while under house arrest. The political prisoners are accused of crimes varying from illegal detention, kidnapping, aggravated robbery, conspiracy, and other charges. One of the political prisoners is a woman and another, Ramirez Rodriguez, is a 75-year-old elder who is currently experiencing health problems, including what appears to be a stroke.

There are multiple arrest warrants for more than 50 community leaders and over 100 names mentioned in legal claims of the people co-opted by the company or Hidrosalá project. The atmosphere is one of fear, threats, and intimidation in the communities of the municipality of San Pablo, San Marcos. The communities do not agree with the construction of Hidrosalá because the private megaproject is taking virtually the entire flow of the river in order to maximize their profit, affecting not only the ecosystem and the life of the species that depend on the river, but also displacing the communities that have lived and used the river since time immemorial.

The General Law of Electricity, which was approved during the Arzu Administration, promotes the construction of private hydroelectric projects in almost all exploitable rivers in the country and privatizes the generation, transportation, and marketing of electricity. The Ministry of Energy and Mines has granted concessions slated to use the rivers for 50 years while granting companies tax benefits and tax incentives. Amid this infrastructure development, the ones most affected are the people who use electricity; in Guatemala they pay some of the highest electricity rates in all of Central America. However, this extractive model will not be easily imposed. Communities, municipalities, departments, and entire peoples have spoken out in defense of the rivers, Mother Earth, life, and territory. Indigenous Peoples have become instruments for the struggle of the peoples and for the defense of Mother Earth, and future generations in Guatemala and all over the world. Without water there is no life. Ate che’wa’ chwinqlal.

—El Consejo Maya Mam te Txe Chman is an ancestral governing body of the Maya Mam people of San Marcos, Guatemala. The International Mayan League is a Maya organization whose purpose is to promote, preserve, and transmit the cosmovision and worldview, culture, history, and contributions of our ancestors and the values of our traditional knowledge and stewardship of the earth into solutions and actions against current threats and violations affecting our peoples, the earth, and humanity.