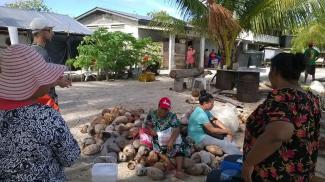 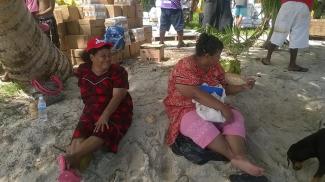 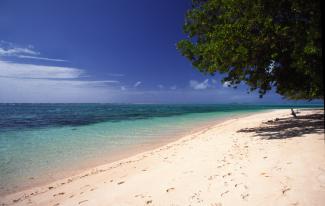 Between 1946 and 1958, the United States detonated 67 nuclear bombs in their Pacific Proving Grounds on, in, and above Bikini and Enewetak Atolls in the Marshall Islands, a part of the United Nations Pacific Trust Territories. Hydrogen bombs, especially the March 1, 1954 Bravo test, were immensely destructive. Visible from 250 miles with a mushroom cloud stretching 60 miles across, Bravo vaporized several small islands, left a mile-wide crater on the atoll, and generated heavy radioactive fallout across a 50,000 square mile area. With a lethal fallout area of 27,000 square miles, it remains the largest and “dirtiest” nuclear weapon the US ever detonated, dwarfing the radioactive releases of Chernobyl and Fukushima.

Military personnel monitoring conditions on Rongerik Atoll reported off the charts fallout, received advice to take shelter, and were evacuated on March 2. On neighboring atolls, fallout was heavier. Families on Rongelap and Ailinginae suffered near fatal exposure. They were evacuated on March 3; neighboring Utrok Atoll was evacuated March 5. Dangerous levels of radiation also blanketed the populated atolls and islands of Likeip, Jemo, Ailuk, Mejit, Wotje, Erikub, Maloelap, Wotho, and Majuro, a fact confirmed by military personnel who arrived to collect samples on March 6 and 7. Radiation sickness was evident. Yet, as noted in the record for Likiep, no medical attention nor evacuation occurred due to the “logistical problems of moving a large population.”

The downwind atolls had been previously evacuated during earlier tests. However, the concept of radiation and the dangerous nature of fallout from these bombs had never been explained to ri-Majol (the Marshallese). There was no instruction on how to take protective action; there was no perceived threat to take shelter from. For those ri-Majol evacuated to Kwajalein, no medication was given to relieve pain. Instead, to understand the health effects of acute exposure to radiation, they received human subject numbers, were photographed, and began their unwitting service in Project 4.1, a classified research experiment that operated under varied names from 1954 to 1992.

For four decades, U.S. medical scientists traveled to the Marshall Islands to document degenerating health and conduct related experiments, all without informed consent. All told, 1,156 men, women, and children were enrolled in studies exploring the acute and late effects of radiation. Among the findings of this research: radiation exposure generated changes in red blood cell production and subsequent anemia; metabolic and related disorders; musculoskeletal degeneration; cataracts; cancers and leukemia; and significant impact on fertility as evidenced by miscarriages, congenital defects, and infertility. Their experiences also demonstrate how chronic and acute radiogenic exposure compromises immunity, creating population-wide vulnerability to infectious and non-communicable disease.

Struggles to reclaim self-determination
When the Marshall Islands signed a Compact of Free Association in 1983, the ability to effectively govern was compromised by its complete dependency on the U.S. for economic, health, education, and other support. It was not until 1999 that the Republic of the Marshall Islands received the declassified documents demonstrating that fallout from the 1954 Bravo blast had blanketed the entire nation, significantly endangering the health of all 22 populated atolls and islands. To this day, the U.S. only acknowledges a responsibility to assist in the treatment of radiation-related disease of the people who lived on four atolls, not the nationwide experience.

Bilateral agreements between the U.S. and the Marshall Islands require attention to nuclear wastelands. On Rongelap, remediation of some radiation hotspots and construction of new homes on Rongelap Island has occurred, though families have yet to trust U.S. assurances that it is safe to move back. Given the immense degree of contamination in the larger terrestrial and marine environment, many places are officially off limits. Without the ability to access critical resources on all the islands in the atoll, a return to a culturally vibrant, self sufficient, and healthy way of life seems impossible, a sentiment reinforced by the experience of Enewetak.

In 1980, following a 3-year effort, the U.S. declared Enewetak cleaned up. Highly radioactive surfaces on some islands had been scraped, hotpots on other islands scoured, and soil, metal, concrete and other debris dumped into the “cactus” blast crater on Runit Island and covered by an 18- inch concrete cap. No effort was taken to address intensely contaminated conditions in the lagoon and marine ecosystem, and only three of the atoll’s forty islands received some measure of remediation. Nevertheless, the U.S. declared Enewetak safe, assuming resettled community followed the rules: live only on islands in the southern part of the atoll; know of and avoid any hotspots on those islands; avoid contaminated dust; avoid harvesting or drinking water, bird eggs, turtles, mollusks, clams, shellfish, and reef fish in the highly radioactive northern islands; and restrict dietary consumption of all local foods to below 30 percent.

Today, Enewetak residents are deeply dependent on food supplements and modest distributions from interest earned on the Enjebi Community Trust Fund. To make ends meet, people ignore the “no go” zones to secure food and water. Some scavenge debris from abandoned military sites and nuclear waste dumps on the northern islands, trading copper for goods at the Enewetak local store. Given extreme pollution and impoverishment, climate change has hit Enewetak hard. Wind and storm surges scour islands, and families lose stored supplies of food and water. Salt contamination of soil, plants, and fresh water supplies creates immense suffering. The promise of reclaiming a culturally vibrant way of life in this context has been elusive.

Lessons on regaining self-determination
As noted in the 2012 Mission Report and Recommendations from UN Special Rapporteur for Environmental Contamination and Toxic Waste, and reconfirmed in the 2014 Universal Periodic Review of the Marshall Islands conducted by the UN Human Rights Council, strategies have been identified to restore the environment, grow healthy and safe food, and enhance individual, family, and community health. Yet, implementation has lagged due to the United States’ refusal to fully fund the primary reparation mechanism it established, the RMI Nuclear Claims Tribunal. And, the environment, health, and human rights issues associated with nuclear testing are compounded by climate change-related disaster. The government of the Marshall Islands has on its plate an ever-expanding array of sobering responsibilities—and they are taking action.

In an effort to reduce their longstanding dependence on oil for desalination and electrical production and actualize their commitment to be a carbon-neutral nation, with international aid, solar-powered desalination plants have been installed, and public health reporting and medical training and other education programs have been improved. A new campus of the University of the South Pacific has opened on Majuro, offering for the first time a means for local graduate students to earn a doctorate degree. And, expertise and leadership in civil society and government has been enhanced by college educated ri-Majol, whose years living in diaspora have strengthened their appreciation and resolve to ensure a culturally vibrant island life for future generations. For example, a reinvigorated civil society played a significant role in the May 2016 humanitarian mission to outer islands providing relief following a severe national drought. Planned disaster response involved delivering basic supplies of food, water, and fuel. Public health issues associated with water scarcity were raised by civil society organizations, who created and delivered some 2,000 women’s hygiene and menstruation kits, interviewed women about drought-related health issues, and delivered a post-mission assessment with recommendations for improving future disaster response.

One the more exciting examples of proactive effort is the moi (Pacific threadfin) fish hatchery, fish farming, and feed mill initiative, run by a corporation created by Rongelap local government. Expansion of the project to commercial scale is occurring with a grant from the US AID Pacific American Climate Fund. Moi fish farming was originally proposed for Hawai’i, where a pilot project demonstrated success. In the Marshall Islands, where large lagoons provide a sheltered environment for farmed fish and labor costs are comparatively low, the project has taken off. New hires undergo a six-month scientific training course with pay and benefits that exceed national norms. Five years in the making, the company is in a rapid expansion mode with employment and production on track for five-fold expansion by the end of 2016.

Ri-Majol are also demonstrating the power of their voice on the world stage. In 2014 the Marshall Islands filed applications in the International Court of Justice to hold the United States, United Kingdom, France, Russia, China, India, Pakistan, North Korea, and Israel accountable for violations of international law with respect to nuclear disarmament obligations under the 1968 Nuclear Non-Proliferation Treaty and customary international law. In 2015, Marshall Islands Ambassador Extraordinary and Plenipotentiary for Climate Change, Tony de Brum, played a leadership role in organizing at COP21 a “high ambition coalition” of over 100 nations, action that led to the historic adoption of a treaty that limits global warming to 1.5°C. The Marshall Islands’ historical experience and committed actions locally and globally clearly demonstrate their paramount concern: there is no struggle more important than this continual struggle to secure the most important human right, the right to exist.

Read this article in full here.

— Barbara Rose Johnston is an environmental anthropologist and the senior research fellow at the Center for Political Ecology in Santa Cruz, CA. Brooke Takala Abraham is co-director of the Marshall Islands Women’s Research Initiative and a PhD candidate in Education for Sustainable Development at the University of the South Pacific in the Marshall Islands.