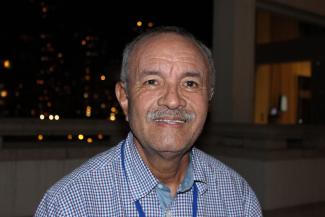 For more than 25 years, MOPAWI has worked to engage local and Indigenous communities in the integrated management of the Río Plátano Biosphere Reserve and other protected areas in northeastern Honduras. Located within the Mosquitia area, the reserve contains the largest intact rainforest north of the Amazon and was classified as a UNESCO World Heritage Site in 1982 in recognition of its natural and cultural heritage values. The organization has collaborated with Indigenous groups in Honduras to create a forest guard program that develops ecological guidelines and zoning for the Mesoamerican corridor, including rules for hunting, fishing, forestry, and agriculture. Along with community forestry, the group’s activities include sustainable agriculture, micro-enterprise development, ecotourism, and advocacy for Indigenous land rights.

OM: “We have, since the Equator prize, been more recognized. We are able to work with other organizations to have more influence in the government. And it has been very important in the process to achieve Indigenous Peoples’ land rights because Indigenous Peoples are more known in the country and in society. Indigenous people used to be ignored and not taken into account.

The challenge is big for Indigenous Peoples because our cultural frontier is expanding very fast into their territories. Loggers have more facilities to enter forests as lumber is in greater demand so there is more pressure. When Indigenous Peoples do not have land title, they are vulnerable. So they have to get organized. A very key step is capacity development. But getting organized does not mean to only have a name, it means to have all legalities with the government, to do a lot of capacity building, to learn all about the national legislation in regards to Indigenous Peoples. We must learn all of this information and manage it well in order to negotiate our rights. We must have a well defined agenda for negotiating the land titles. In our case the land titles are signed and drafted in a way that no one can sell the land—this goes for everybody!

The major threats and challenges [we are facing] are the illegal intrusions into the land by people from the interior, western, and central part of the country who grab the land and do illegal logging and illegal cattle ranching. Those areas have been used for many decades and the forest there has been depleted so people are moving and extending their culture and frontier into La Mosquita region. We have worked on land tenure for almost 30 years, strengthening local community organizations and researching and mapping the land. We got the land titles for Indigenous Peoples in this region, which started being issued in 2012 and were finalized in April of this year. Almost 1.4 million acres of land and territory was titled in favor of the Indigenous Peoples of this region. The other strategy is developing a method for sustainable food production through soil restoration and training people in improving seed quality. These methods prevent people from deforesting, and the restoration of degraded land means you can replant forests. This model, which took over 20 years of research, was developed for producing both food and forest.”