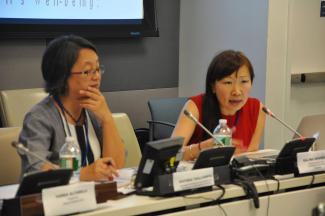 On October 1, Galina Angarova (Buryat) stepped into her role as Cultural Survival’s executive director. We look forward to her leadership, which will support an increasing global presence and effectiveness of Cultural Survival’s ability to reinforce Indigenous goals of self-determination and self-governance. Angarova recently sat down to talk about a range of topics, including some of her previous work as an Indigenous rights advocate and a foundation program manager, as well as her plans for Cultural Survival.

Cultural Survival: How did you get into this line of work, advocating for Indigenous Peoples?

Galina Angarova: I come from the Buryat Peoples, who have lived in Siberia for millennia on both sides of Lake Baikal. I was born and raised in a community of about 400 people. My grandmother would tell me stories that encapsulated the wisdom of our ancestors and have been passed down for generations. I vividly remember a time when I was five years old, when my grandmother took me to a ceremony on a wooden horse cart miles away from our village. I still recall the fire, the chants, and the prayers of the women in my clan. I grew up with a deep sense of understanding of our lifeways and belongingness to the land, to my people, and a deep love for my culture and for Mother Earth.

Growing up in Russia, it was hard to really understand my own situation and the situation of my people. It took leaving and living far away to understand the degree of both external and internalized oppression, colonization, and paralysis that my people and other Indigenous Peoples in Russia currently face. I received a full scholarship to graduate school in the United States, in New Mexico. This is where I first met Native American Tribal members. I was blown away by their rich and vibrant cultures, the people, and the food. I made friends with local people and I learned that there were more similarities than differences between my people and Native American communities.

My work as an advocate for Indigenous Peoples started when I joined San Francisco-based Pacific Environment in 2007. Even though the organization’s focus was on environmental issues in the Pacific Rim, we worked closely with Indigenous communities in the regions of Siberia, the Russian Far East and Arctic, and Alaska. I worked as a program associate for community-based initiatives and was promoted to the Russia program director where I started organizing global campaigns and representing issues of Russian Indigenous Peoples on the international level. In 2012, I joined the board of Indigenous Funders for Indigenous Peoples, where I served as a board member for seven years.

CS: Tell us about your work with Indigenous Peoples on the ground.

GA: During my years with Pacific Environment, our team helped to build one of the most effective movements in Russia that works to protect both local people and the environment. This is what influenced my belief that local and Indigenous communities are best equipped to protect their own environment. This is why I have always prioritized local needs and building relationships. One of the most successful campaigns I led was against plans to build a gas pipeline in Altai, an Indigenous republic in Western Siberia. Together with local Indigenous partners, we worked to bring in alternative energy and created protected areas managed by Indigenous Peoples. Other successful campaigns were protesting against a toxic paper mill on Lake Baikal, an oil pipeline that was supposed to be laid in the proximity to the northern shore of the lake, and a hydroelectric dam that threatened to flood hundreds of square kilometers of forest and a settlement of 5,000 Evenk people.

CS: Please tell us about your work with the Indigenous Peoples’ Major Group at the United Nations.

GA: As Tebtebba’s policy and communications advisor, my primary role was to serve as the Global Organizing Partner and Focal Point for the Indigenous Peoples Major Group at the United Nations from 2013-2016. My goal as the main negotiator for the constituency of Indigenous Peoples was to advocate the inclusion of key references to Indigenous Peoples in the outcome documents of Post-2015 Development Agenda and Sustainable Development Goals, World Conference on Disaster Risk Reduction, and World Conference on Financing for Development. I organized preparatory meetings in Africa, Asia, and Latin America, and gathered ideas from Indigenous representatives in these regions on key topics such as climate change, poverty, health, education, traditional knowledge, and Free, Prior and Informed Consent (FPIC). I also led a team of Indigenous experts to provide input to ensure safeguards for Indigenous Peoples for the financial arm of the UNFCCC Green Climate Fund.

CS: Tell us about your most recent position, with the Swift Foundation.

GA: I managed a portfolio of about 75 partner grantees in Africa, South America, Canada, and the United States. During my time with the foundation, I increased the number of Indigenous-led organizations in the portfolio, strengthened connections to Indigenous communities and focused on Indigenous-led grantmaking, and advocated the shift toward more multi-year unrestricted grants. I also initiated the idea of an Institute on Philanthropy from an Indigenous perspective and rallied the Board to support it with a multi-year grant. The Institute is now thriving and is hosted under the umbrella of the International Funders of Indigenous Peoples.

CS: What are the major challenges Indigenous Peoples face today?

GA: Climate change is becoming the number one risk for Indigenous Peoples, as we are one of the most vulnerable populations and are disproportionately affected by its impacts. In the Arctic, communities are suffering from the receding ice, changing weather patterns, increased storms, and changes in species and animal behavior. In the high altitudes of the Himalayas, people depend on the seasonal flow of water from glaciers. The unprecedented rate of melting is resulting in more water in the short term, but less in the long run. Communities in Siberia and the Amazon are currently affected by the raging fires.

The 2018 Global Witness report documented that it has never been a deadlier time to defend one’s community, way of life, or environment. Their latest annual data on violence against land and environmental defenders shows a rise in the number of people killed in the year 2017 to 207—the highest total ever recorded. Indigenous defenders represent roughly 25 percent of the total of those killed. With Indigenous Peoples making up just 5 percent of the world’s population, they are massively overrepresented among defenders killed.

CS: What needs to be done to bring about solutions to these challenges?

GA: The key elements for thriving communities are selfdetermination; ownership and access to their lands, territories, and resources; traditional livelihoods; ownership of capital; opportunities to build their own capacity; Free, Prior and Informed Consent; and legislative, technical, and financial support from their State governments and philanthropic institutions. These are the cornerstone elements of the UN Declaration on the Rights of Indigenous Peoples.

Cultural Survival is in a unique position to address these issues, having the experience and the reach. We need to support research to better understand and respond to climate impacts. We need to use traditional knowledge and Indigenous adaptation and mitigation strategies and transform them into action. We need to build capacity of Indigenous communities and support them in asserting their rights. We need to strengthen community leadership and technical know-how, and create and disseminate educational resources to advance human and Indigenous rights. We need to connect Indigenous networks and be informed about events on the ground. We need to tell stories, increase media attention, and expose government and industry abuses. The most powerful stories come from people themselves.

CS: Please share your vision and goals for Cultural Survival.

GA: I would like to stress the importance of a common vision shared by all the members of the Board and staff. I believe that every single member of the Cultural Survival team should have a voice and that the vision of the organization should be based upon consensus. One goal is building a successful program for Indigenous women and girls and addressing issues at the intersection of Indigenous women and climate change, traditional knowledge, environmental and human rights defenders, and elevating the role of Indigenous women in traditional governance systems and decision making at all levels.

Among the long term goals, I want to elaborate a message and programming around Indigenous food systems and nutrition, grow the field of Indigenous-led philanthropy as well as our own funds within Cultural Survival, and build alliances with other movements and networks. Our work is not possible without the support of our friends and allies. We have launched the new Leadership Transition Fund to support Cultural Survival through this transition period, to build on our successes and guide the organization to new work to address the realities of the ever changing world, and come up with an updated strategic direction. I invite you all to support our joint efforts and donate to the Leadership Transition Fund and ensure the success and longevity of Cultural Survival.