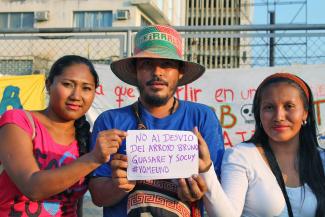 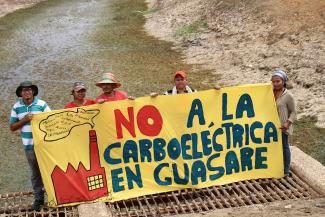 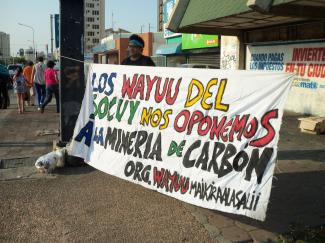 Located on the border of northern Colombia and northwestern Venezuela, the Guajira Peninsula was once an ecologically rich territory, full of tropical rainforests and an array of biodiversity, flowing with a plentiful supply of clean water and air. However, since transnational companies began buying land across the peninsula in the 1980s, principally for coal extraction, the landscape has become increasingly bleak. The water is now murky and polluted; drought and deforestation have caused the once fruitful lands to become arid and barren. The systematic destruction of the environment by mining companies has also led to serious problems for the Indigenous communities residing in the area, principally the Wayuu people.

On the Guajira Peninsula in Colombia, there are an estimated 270,414 Wayuu people living on 10,780 square kilometers of the peninsula. In Venezuela, there are known to be 725,128 Indigenous people residing in the country, with the Wayuu accounting for 58 percent of the total Indigenous population. The Guajira Peninsula in Venezuela forms part of the state of Zulia, with extensive mining taking place in the municipality of Guajira north of the Guasare River at Mina Norte, and to the south of the river in the municipality of Mara, at Mina Paso Diablo.

On February 10, 2015, Decree No. 1,606 was approved by Venezuelan President Nicolas Maduro. This decree gave the national army and the Carbones del Zulia company the duty to oversee further exploitation of coal and other minerals in the municipalities of Mara and Guajira, granting five additional mining concessions in the state of Zulia. The Wayuu communities residing in the areas of Guasare, Socuy, Mache, and the Cachiri river basins in the Sierra de Perija would be principally affected by the carbon contamination produced by the opening of these additional mines. However, these communities immediately took action and protested the enactment of the decree approved by Maduro, bringing international attention to the situation and stopping, for now, the opening of additional mines in the sector.

Luisbi Portillo, coordinator of the nonprofit organization Sociedad Homo et Natura, and member of the Ecologist Federation of Zulia and of the National Front for the Defense of Water and Life, works to mobilize Wayuu communities to defend their lands against the advancement of mining industries. In a recently published article, Portillo delineated the problems faced by Wayuu communities caused by Mina Norte and Mina Paso Diablo, vehemently opposing the opening of five additional mining concessions in Zulia.

Portillo states that in 2002, field studies showed that metals such as lead, vanadium, zinc, and cadmium were present in the water of the rivers in the state of Zulia on the Guajira Peninsula. The waters have become increasingly mineralized since 1987 Mina Paso Diablo was opened. Portillo has urged the government and organizations protecting the lands of the Wayuu to investigate how many tons of sulfur are released yearly into the surrounding atmosphere, with the mine explosion rate in Zulia currently emitting 7 million tons per year. He also notes that the government still does not support the Wayuu communities in their fight to keep new mines from opening in the region. In an interview with Cultural Survival, Portillo stated that “the government isn’t helping at all. In fact, it is doing the opposite. The government has broken the legacy of our former President Hugo Chavez and given in to pressure from the governor of Zulia and from the owners of carbon energy companies, who have declared that the exploitation of carbon in this region will continue to grow to maximum capacity.” Portillo also points out that Chinese companies are opening a coal fired power plant in the municipality of Mara at Mina Paso Diablo, and a naval port for coal on the island San Carlos-San Bernardo in the Gulf of Venezuela.

Portillo denounces the absence of government support for Indigenous communities in the region, asserting that environmental crimes committed by mining companies include the unsupervised discharge of toxic leaks, illegal use of wood from deforested trees in the area, and uncontrolled spills of toxic oils and liquids. When asked about the current situation of the communities affected by the mines on the border of Colombia and Venezuela, Portillo explained that for communities enclosed by the perimeter of certain mines, like Santa Fe and Sierra Maestra, “their water, their land, their fields, and their livestock are all extremely negatively affected by the carbon dust and the constant explosions that make the ground shake. The waters of the Guasare River are dammed up by the El Brillante Dam in the municipality of Guajira, and this liquid arrives to the Wayuu households completely contaminated by particles of carbon.” Portillo says that the main efforts to provide clean water to Wayuu communities affected by the mines are concentrated in making sure that new mines are not opened, so that the waters of the Socuy, Maché, and Cachirí rivers are not contaminated. In addition, he said, “we are trying to close the mines currently open on both sides of the Guasare River. These mines contain heavy metals that go into the waters of Guasare, the fish in these waters are contaminated by the heavy metals lead, vanadium, zinc, and cadmium. This is the same contaminated water that the people drink.”

As conditions deteriorate and pressure from mining companies builds, Wayuu communities have organized movements to stop the coal extraction advances consuming the State of Zulia. The Indigenous organizations Wayuu Maikiraalasalii and the Cultural Indigenous Association Wayuu Yalayalamaana, located in the lowlands of the Socuy river in the municipality of Mara, have been continuously organizing meetings and protests since 2005.

The problems caused by mining also extend to the stretch of the Guajira Peninsula in Colombia. The International Work Group for Indigenous Affairs estimates that about 350,000 individuals have been negatively affected by the coal industry operating on the peninsula. The seizure of Wayuu lands to expand mining has led to the displacement of entire families, villages, and communities since the mining began more than 30 years ago. Mining in the sector has also caused serious health problems for countless members of the Wayuu community. Mining companies have dammed up and diverted various water sources, including that of the Rancheria River, which is one of the main sources of water for the Guajira Peninsula. As a result, the daily consumption of water per person in Wayuu communities in Guajira is only .7 liters per day, a fraction of the UN recommendation of 50 liters per day. There is no water for communities to cultivate the crops they once depended on, such as the Yucca root vegetable and bananas. Most community members have to walk 5 to 10 kilometers to find water and bring it back to their settlements.

The Wayuu did not expect the mining in their region to lead to the complete degradation of their environment, their homes, and their communities. Remedios Fajardo, a Wayuu leader from Colombia, says that “many Wayuu believed that the mine would bring solutions to the region’s poverty, to the problems with access to clean water, to education, healthcare, and sustainable development. We hoped that we would receive some of the benefits from our land, which is so rich in minerals.” The picture painted by mining companies was something completely different than the outcome of their practices. Instead of bringing solutions to the region’s poverty, the mines have covered the landscape in coal dust, increased the poverty of an already struggling region, and brought a plethora of death and disease to Wayuu communities.

In May 2016, 140 Wayuu leaders arrived in Bogota, the capital of Colombia, to denounce the death of so many Wayuu children. They claim that 12,000 Wayuu children under the age of 5 have died since 2012. In the famous Bolivar Plaza, they placed small boxes representing coffins for each Wayuu child that has died. Remedios Uriana, one of the 140 Wayuu leaders that participated in this protest, declared the mining practices in the region to be “nothing more or less than an extermination of a community.” Meanwhile, across the Guajira peninsula in Colombia and Venezuela, mining companies ceaselessly pursue the opening of new mines and the expansion of old ones, even as the health, homes, and lands of Wayuu communities continue to disintegrate.

All photos courtesy of Luisbi Portillo.