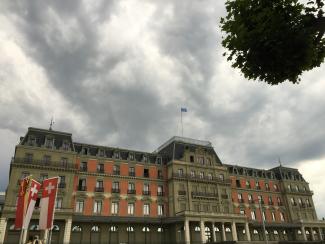 Human rights are measured through United Nations human rights covenants and conventions. Regular reviews monitor how States are realizing the rights recog- nized in these treaties. Indigenous Peoples’ involvement is imperative to seek justice through the review process and contribute to global standard setting. The review of every nation offers a chance to educate citizens about their rights and demand realization of the rights enshrined in the treaties ratified by their governments. In this series we aim to break down the core treaties.

The International Covenant on Economic, Social and Cultural Rights (ICESCR) is an international human rights legal agreement promoting the principle of progressive realization of all economic, social, and cultural rights by States to their peoples. It was adopted as a UN General Assembly Resolution 2200A (XXI) on December 16, 1966, entering into force on January 3, 1976. The covenant is a mechanism to monitor implementation of improvements in basic conditions of employment and labor practices for all people in the areas of social security and basic standards of living, health, education, and cultural development.

Country Reports and Shadow Reports
An 18-member committee of experts review States as guarantors of the rights enshrined in the ICESCR, focusing on the realization of citizens’ full range of rights. When a country ratifies the covenant, the initial State report is due within two years. Periodic reports are subsequently due every five years. The UN Committee on Economic, Social and Cultural Rights (CESCR) follows current best practices developed by the UN Committee Against Torture to draft a list of issues to initiate an informed dialogue. The committee meets three times a year for three weeks in February and March with a two-week plenary and one-week pre-sessional working group; in June for a three-week plenary; and in September/October for a three-week plenary and one-week pre-sessional working group. Six to ten States are reviewed in each session.

Indigenous Peoples are encouraged to submit information for the list of issues. The pre-sessional working group, as part of the first day at each session, sets aside time for NGOs to give oral statements relevant to realizing the rights of ICESCR. Indigenous Peoples can submit their shadow reports with specific concerns three to six weeks prior to the beginning of a review session. The shadow reports should be clear and concise, providing the experts with precise information regarding the challenges the country faces in implementing the rights enshrined in the ICESCR.

Five Phases of the CESCR Cycle
The UN human rights treaty body process follows five phases for each State review: preparation, interaction, consideration, adoption and implementation. The preparation phase is centered around educating and empowering people to participate effectively and prioritizing specific rights enshrined in the ICESCR. The heart of the action is to forge a new advocacy agenda aimed at influencing State policies that will positively affect Indigenous Peoples and ensure their dignity and equality. The result of the preparation phase is the creation of a shadow report that outlines the priorities of the people in the country under review. Civil society should be consulted in the drafting of national reports and should also coordinate national movement around the review.

The interaction phase initiates participation with the Committee secretariat and expert members to ensure that issues, questions, and specific recommendations are understood and considered in the State review. The CESCR plenary session offers opportunities to engage with the expert members in the Palais Wilson in Geneva. A country rapporteur is assigned to lead the dialogue with the State under review. One should examine the research record of the assigned rapporteur. By conducting a research review of publications and viewing webcasts of prior sessions, one can better understand the positions of all 18 Committee experts and the process. The interaction phase prepares the Committee to better discuss the facts and suggest specific recommendations to change conditions guaranteed under the ICESCR with the State representatives. It is essential, when possible, to engage with the State for solutions to the realization of economic, social, and cultural rights. Recommendations should be about changing the country’s national policies and mobilizing necessary resources to achieve the articles of ICESCR.

Consideration Phase
The consideration phase revolves around the rights in the ICESCR and those raised in the reviews by the experts. It should empower people to coordinate campaigns reflecting the reality on the ground and allow for affected individuals and allies to hold their government accountable via the presession working groups. The consideration itself consists of six hours of conversation between the State delegation and the experts, led by the country rapporteur. This dialogue will influence recommendations in concluding observations.

In the morning session on the first Monday, there are meetings with partners where one can share specific situations and updates regarding economic, social, and cultural rights. Most important is to be brief and direct regarding rights violations and to propose specific solutions. There are two, three-hour sessions of dialogue with the State. The first session takes place in the afternoon slot, and the second the following morning. Lunchtime briefings offer an additional possibility to speak to the Committee experts prior to the review. During the review, the Committee chair welcomes States to open the dialogue with a short overview on the current situation. A country rapporteur begins the questions of the State under review and sets the stage for rest of the experts.

The meeting is organized in four clusters to discuss the groups of ICESCR articles. Committee members ask questions and make comments regarding the rights in Articles 1-5; Articles 6-9; Articles 10-12; and Articles 13-15. For each group, experts take the floor to raise specific questions and comments as well as make recommendations to the State. The State then responds to questions. Special time for followup questions is provided to enable members to make the dialogue as interactive as possible. At the conclusion of the review, the rapporteur and the State each make closing statements. State delegations may submit statistical data in writing and any additional information for 48 hours. The secretariat and rapporteur then draft concluding observations that are adopted following the review of all States in the session. Based on the State report, the Committee can request additional information or adopt concluding observations. While rare, the Committee can also decide to conduct a technical assistance mission if the State ignores a request, making appropriate recommendations to the Economic and Social Council.

Adoption and Implementation
The adoption phase is where recommendations are issued to the State based on the list of issues, shadow reports of NGOs, and the actual six-hour review. It should accurately reflect the priorities of Indigenous Peoples. On the final day of the session, there is an open meeting and a press conference at the Palais des Nations where concluding observations are given. The implementation phase closes the cycle, returning to the community and national level a demand for action based on the recommendations in the concluding observations. Civil society can organize press work and initiate a campaign to implement the concluding observations.

Optional Protocol and General Comments
On December 10, 2008, the 60th anniversary of the Universal Declaration of Human Rights, the UN General Assembly unanimously adopted the Optional Protocol. The primary principle is full realization of economic, social, and cultural rights for all people utilizing the maximum available resources of the State, including the right to work, fair wages and social security, and standard of living from food to housing, health, education, culture, and scientific advancements. Governments have 180 days to provide information regarding implementation of the Committee decisions under the Optional Protocol, after which time, one can file a complaint.

General comments are determined by the 18 Committee members through days of discussion and subsequent drafting of legal language on the rights enshrined in the ICESCR articles. Comments elaborate on the articles and provide guidance to governments on interpretation of rights enshrined in the ICESCR. The general comments provide insight into government compliance with the covenant as well as ideas on better implementation. Participation in the creation of a general comment allows Indigenous Peoples to frame the rights as they have evolved to reflect the current reality.

Economic, social, and cultural rights address the livelihood of all peoples in the pursuit of liberty. UN Special Rapporteur on Extreme Poverty, Philip Alston, recently said, “The progress we have made is not nearly as great as we think it is in regards to economic, social, and cultural rights…[these] rights remain entirely marginal in the entire human rights enterprise. They are an afterthought.” Until this changes, we must recommit to the implementation of the rights in the ICESCR as a global priority for Indigenous Peoples.

— Joshua Cooper is a professor at the University of Hawai’i, West Oahu, Kapolei and director of the Hawai’i Institute for Human Rights.

Photo: Palais Wilson in Geneva is the hub for human rights and home to the Committee on Economic, Social and Cultural Rights. Photo by Joshua Cooper.