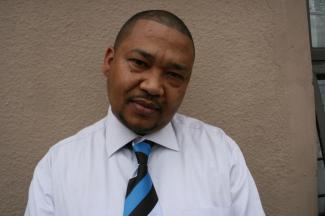 Cultural Survival welcomes our newest team member, Shaldon Ferris. Ferris was born in Kliptown, Johannesburg, South Africa. His mother’s maiden surname is Damakwa, and he identifies with this KhoiSan South African tribe. His search to discover his roots has led him on the path to become an award-winning filmmaker. Although he grew up in an impoverished neighborhood, his parents persisted and provided him with a quality education. After finishing school, Ferris obtained a grant to study computer programming.

Recalling how he got into media production, Ferris says, “I always had a passion for storytelling and always wrote very good essays in high school. I thought about becoming a writer. I was inspired to make films as a teenager, and I decided to pursue this calling. I saved up some money, bought a camera, and filmed some weddings and parties to learn how to use it. Soon afterwards I enrolled at the University of South Africa to study communications. I downloaded a Spike Lee script from the internet and followed the format. After shooting my very first feature, Eldorado, it was entered into the biggest film festival in Africa, the Durban international film festival, and won the Special Mention Award at the 2011 Durban International Film Festival.”

Ferris became involved in radio when he started volunteering at his local community radio station, Eldos FM, eight years ago in Eldorado Park in Johannesburg. Since then, his live show, “Cleaning Up The House,” which airs weekly on Saturday mornings, has won numerous awards for most interactive, most entertaining, and best music knowledge. “The show is based on interaction from the community based on current community issues, and centers around fun and laughter for the entire family,” he says.

Speaking about his inspirations, Ferris says, “I am inspired by my late brother, who taught me a lot about music. Sometimes a good song will drive me into a state of creativity. I am also inspired by my immediate surroundings, as many people are living extremely positive lives in horrendously negative circumstances. Everyone has a story to tell, and nobody wants to listen. Finding creative ways to tell a story is what inspires me.”

When asked what the biggest issues he sees for Indigenous communities today, Ferris says, “Recognition. I think what all Indigenous Peoples want is recognition. By nature we are not attracted to big houses and fancy cars, just a place under the sun where we can co-exist with mankind, with enough to live off; that’s really all we want. Our history needs to be taught in schools, on radio and television, so that people will understand us. We don’t necessarily want to fit in, we just need to be respected. It is important for organizations like Cultural Survival to exist, so that ways can be found to spread awareness about the similar and ever-growing plight of Indigenous Peoples around the world. The Indigenous Peoples of South Africa’s stories need to be heard; their languages, cultures, and rituals need to be celebrated and promoted. My role at Cultural Survival will be to relay these stories.”

To learn more, visit www.cs.org/consent or contact Shaldon at shaldon.ferris@cs.org.