The Situation for Women is More Closed: Arika 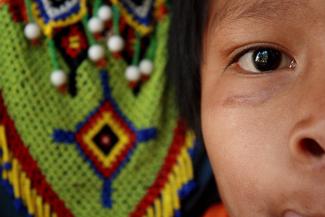 I identify as bisexual. In our Embera language there is no translation for bisexual, transgender, or intersex people; only male or female. In the Embera nation, trans females have recently become more visible. In our language, WERA PA (false woman) denotes the complexity of the matter. I have conversed with elders and learned there have always been lesbian women, gay men, and trans, but it has been a taboo topic and they were expelled from the community or forced to marry under the heterosexual norms to maintain inheritances or familial last names.

When I was 20 in Cartagena, I met a woman who was about 36 years old. I will never forget how she approached me. We were in a forum on Indigenous Peoples and she said, “Your name is a flower as beautiful as you.” At the end of the event we went to dance and ended up being intimate. I had never been with a woman, and it was a very strong encounter with myself. Later I was very attracted to my best friend. Nothing happened for a long time, but my attraction to her was alive. I recognized that I was not in love with my boyfriend at the time. I ended up telling my best friend about my feelings and was surprised that she also liked me. We have been together for three years now and I have recognized myself as bisexual.

With my family the subject is complex. My maternal Embera Chamí family does know, they are a little more open. They wanted to break many social norms within the family; three of the six women did not marry or have children. They didn’t have many lovers either. I think they accept me. My father’s family are mestizos and very Catholic and rejected the issue totally. They don’t know about me and I don’t know how to tell them. I have a cousin who is gay and decided to flee to Argentina with his partner.

Within the community and as an organization leader, I have a leadership role that makes my representation complex. I discovered that some leaders are homosexuals and keep it private for the same reason, because many people in the community would not support them in leadership settings just because they are gay, bisexual, or trans. It is very very complicated. The obstacles at the public level are many. The situation for women is much more closed. There are men who date their boyfriends and they even have a wide circle of friends, but for women it is much more closed.

There are women who have been raped for the simple fact of having a wife or a girlfriend. I fear for my safety, for the safety of my partner. I like to deal with the community, with our people, on the issues of communication, community radio, and human rights. I prefer to have my life in private for security reasons. It is tolerated to be diverse if yours is not made public, but it is not accepted if you go outside with signs of physical affection. Trans women have become more visible; gays and lesbians, not so much.

I want to address the issue of homosexuality and bisexuality in Indigenous communities. I want to share my sexuality and my stories. I have done so with lesbian Indigenous women, daughters of leaders and daughters of authorities, also with very humble countryside women who are discriminated against and who end up fleeing their communities or have been abused. It is a more complex situation for women because in Embera communities there is much machismo. It is a very patriarchal society. Women face a lot of pressure within the traditional structure, but they are also discriminated against for being Indigenous, for being poor, for not speaking Spanish well, because of the way they dress—not only because of their sexuality.

With my partner we continue to build on what love gives us. With my family, I have a lot of responsibilities to support them. I sometimes think of making risky and daring decisions, such as leaving. I want to change to other things. Then I calmly tell myself that I need to organize priorities and responsibilities. I am very happy with my life.