Sparking the Creative Essence of Youth in South Africa 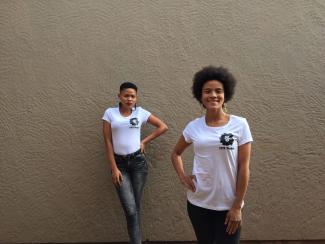 South Africa has been branded as “the Rainbow Nation” because of the diversity of its citizens. The country boasts a very liberal constitution and 11 official languages, none of which, however, include Indigenous languages like Nama or N/uuki. What is becoming more and more apparent lately is the exclusion of the Khoi and San languages, especially from school curricula, radio, and television. Under Apartheid, only English and Afrikaans were official languages. This famously led to the Soweto uprising of
1976 where students rebelled against Afrikaans as a medium of instruction. The actions of the police force of the time were widely publicized, and those who were previously forced to learn in a language that was not their mother tongue started to be heard on a global scale. When Apartheid was abolished, nine more languages were made official, and community radio started to take off. To date, more than 150 community radio stations are operating in South Africa, all with a specific mandate to broadcast to communities that have been overlooked for many years.

Since 1994, the country’s licensing authority, Independent Communications Authority of South Africa, started granting licenses to diverse groups such as women-led cooperatives, farming communities, interest-specific groups, religious groups, and others. The sector started booming, and many employment opportunities were created. Commercial radio stations typically employ talent from the community radio sector, as this serves as an opportune training ground for would-be employees. The very nature of community radio means that volunteers have to wear many hats; for example, a presenter may double as a content producer and a social media content creator. The licensing authority has done well to ensure that previously disadvantaged communities are now able to communicate with each other in languages that they understand.

The one community that has been marginalized the most in terms of language continuity, by both the old government as well as the first 27 years of the new government, is the Khoi and the San community. These are actually separate communities, but for the purpose of this article, it makes sense to group them since very little attention is given to their languages. It is noteworthy that the State broadcaster, South African Broadcasting Corporation, has achieved much in facilitating the development of XK FM, a radio station in Platfontein, Kimberly Northern Cape, South Africa. This station broadcasts in the San languages of Khwe and! Xun, as well as Afrikaans. The station is regional, however, and only broadcasts to the immediate community of Platfontein.

In the last 27 years, South Africa has seen a revival of people returning to their Khoi and San roots, and some community radio stations in other regions are now broadcasting content related especially to awareness and conscientizing people about a history that was largely suppressed—the history of the Indigenous Peoples of Southern Africa. Eden FM in George, Valley FM in Worcester, Bush FM in Cape Town, and Eldos FM in Johannesburg, all have regular features about diverse topics that talk to people about who they once were, and how important that knowledge is to the overall well being of a particular Peoples.

The internet has made it easy for almost anyone with a few resources and a lot of content to broadcast from a makeshift studio in a garage, dining room, or bedroom. Enter IYX Radio, operated by nonprofit organization Indigi Youth Exchange Africa. According to the podcast and online radio platform zeno.fm, “IYX Radio is a Southern African Indigenous online radio station that would like to establish a sustainable and secure network of Indigenous youth, their communities, and access to current Indigenous information and actions. Our goal is to unite Indigenous communities through dialogues and discussions on a variety of Indigenous topics such as Indigenous laws, environmental practices policies and laws, Indigenous linguistics, social conflicts, gender-based violence, conflict resolution, the genocide of Namibia and post-war conflict resolution, as well as Indigenous land affairs, to name only a few. We are interested in bringing Indigenous knowledge systems to the forefront and to integrate that with the urban Indigenous perspective, as we are living in a world where the ancient information is being lost and we must find a way to document and keep this knowledge alive.”

Cultural Survival recently spoke to one of IYX’s directors, Sharri Cannell (San). Cannell is also a Cultural Survival 2021 Indigenous Community Media Youth Fellow. An environmental scientist by profession, she holds an honors degree in Zoology from the University of Johannesburg. Over the past four years, Cannell has embarked on a journey in exploring her ancestral heritage and learning about Indigenous knowledge systems of the Khoe and San people. This journey led to the creation of Indigi Youth Exchange Radio, a space to explore Indigenous heritage and bring it to the forefront for urban dwelling Indigenous individuals, as well as for the world to gain insight into the Indigenous Peoples of Southern Africa. 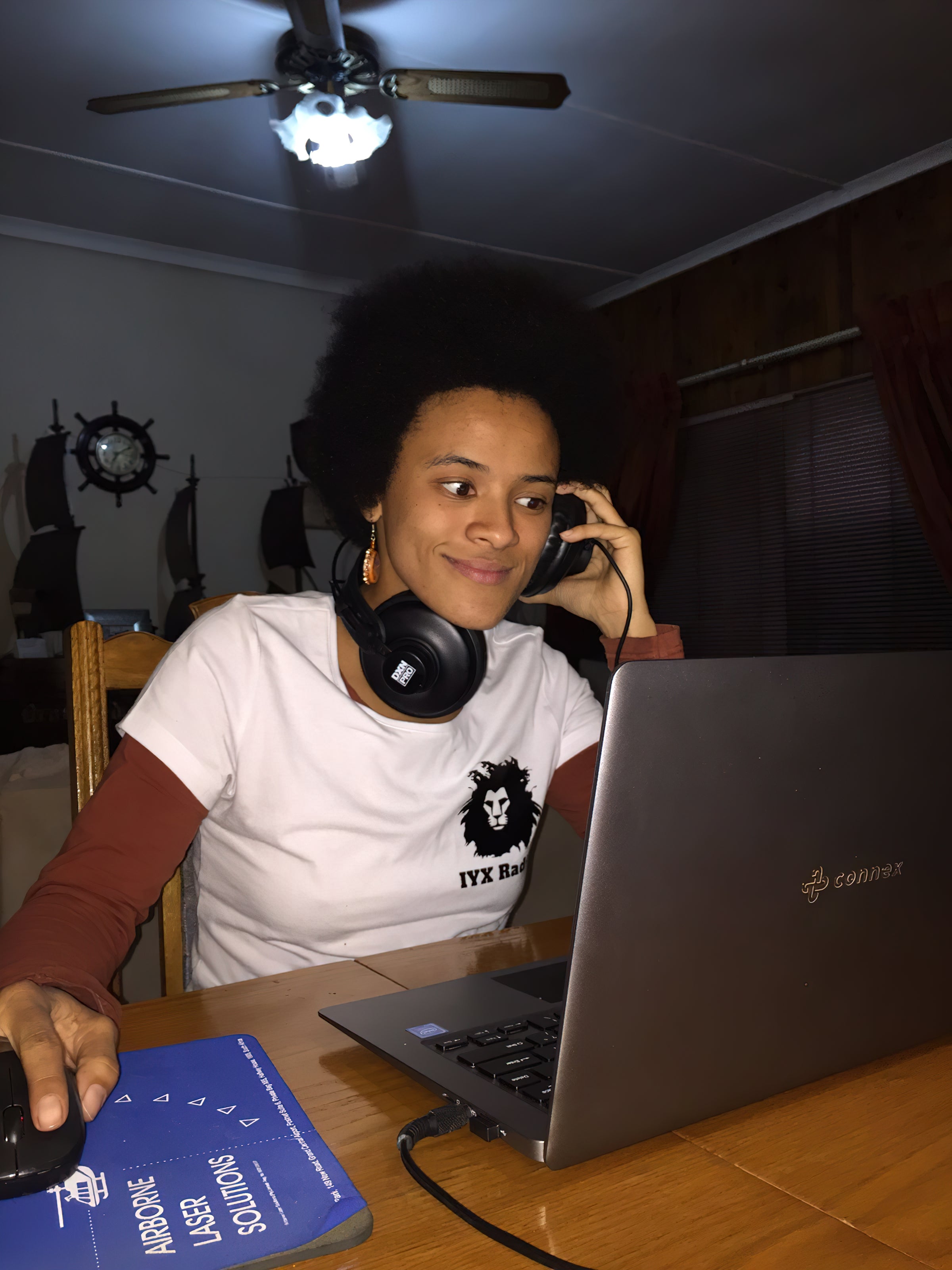 Cultural Survival: What does the Indigi Youth Exchange do?

Sharri Cannell: We provide rural and remote assistance to marginalized communities, specifically Indigenous communities within Southern Africa. I am the treasurer of the nonprofit organization and I also serve as the production manager for our new project, which is called IYX Radio. It is the first of its kind in South Africa. It is run by youth, 90 percent female and 10 percent male. Most of us are under the age of 30. It is very exciting to get this opportunity.

CS: Why did IYX apply for the Cultural Survival Indigenous Youth fellowship?

SC: As a youth-led organization, we have so much to say. As a rural and remote assistance team we were travelling far and wide to places like Namibia. Lots of research has been done on short trips like these, some good, some negative. When we saw the opportunity to apply, we grabbed the chance. We have always been using social media to share what we have learned, but it was not enough, there was more that we would get into. So we took the chance, and thank goodness we were selected, because now we have a platform and we will not let our listeners down.

The name of our online radio station is Indigi Youth Exchange Radio, or IYX Radio, and our fundamental goal is to unite Southern African Indigenous communities—youth and elders—through dialogue about important issues. I think it is very important to bring the urban Indigenous perspective in that space. Many so-called “Coloured” people have identity issues, and maybe the people who come from the cities will gain a different perspective.

CS: Who do you wish to reach and uplift with this radio station?

SC: We would like to empower youth to speak up about issues in their communities, issues about their own personal journeys. For example, in the case of the Namibian genocide, which was more than 100 years ago, we would like the youth to face the past and see the value in knowing about what happened in the past. Secondly, the empowerment of women, because gender-based violence is a massive problem in our country and other countries around the world. We would like to empower young women, specifically, and older women too, so that they can help others to learn from their experiences.

My fellowship project aims to unite Indigenous communities and youth through dialogues and discussions on a variety of Indigenous topics. Eight broadcasters, six women and two men, will create programs on these issues in their own unique voices. Each broadcaster is from a different part of South Africa and comes from a community with unique histories, issues, and needs. Through the project, we hope to digitally archive Indigenous knowledge systems that would usually be passed down orally and make the recordings accessible to urban Indigenous Peoples through radio programs, sparking a revitalization of ancient practices and customs.

Right now we are focusing on the next 12 months; for the next year we are giving this our utmost. We are sparking the creative essence of our youth in a very unique way. We would like to generate our own revenue for the maintenance of the radio station. For the next year we plan to hit hard and significantly, so we’ll see what the future holds. 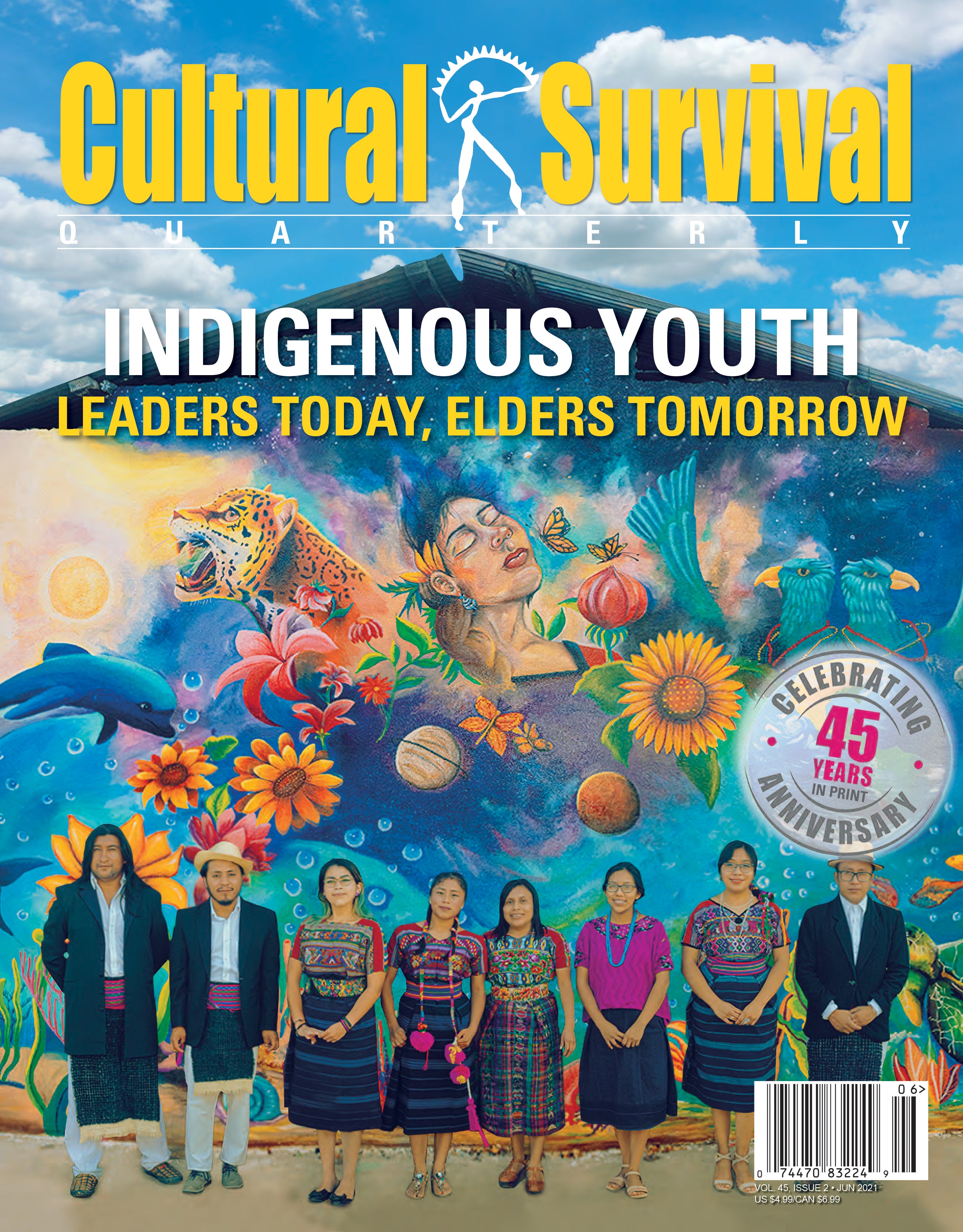