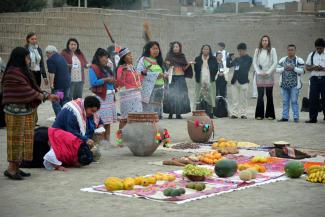 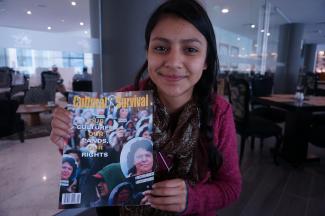 The conference, held in Lima, Peru, hosted over 250 people, including Cáceres’ daughter, Laura Zuñiga Cáceres, who gave many passionate and emotional comments on her mother’s death and the current threats their community faces daily. The theme was Buen Vivir: Supporting the Role of Indigenous Peoples in Bio-Cultural Diversity, Human Rights and Sustainable Economic Models.

The conference was well attended by Indigenous activists, community leaders, and change makers from every corner of the Indigenous world, who came to present on issues, situations, and solutions as a way to help inform funding partners about the realities in their communities. Foundation representatives and funders interested in human and Indigenous rights, mostly from the Americas, rounded out the audience. A staggeringly low number of funders have programs specifically for Indigenous Peoples, and currently less than one percent of all international giving is directed to Indigenous communities. Giving USA reported that Americans gave more in 2015 to charity than any previous year; however, giving to Indigenous issues remains stagnant, while donations to non-Indigenous international causes grew by 17 percent. Because of this, IFIP events are especially important to help create dialogue between Indigenous communities and funding partners.

The opening ceremony was held on the morning of October 25 at a historical Indigenous site in the Miraflores district of central Lima. The Huaca Pucllana was a site of great importance to the Lima culture, a society that developed at the Peruvian Central Coast between 200 and 700 AD; modern archeologists estimate the site to have been built around 500 AD. According to our hosts, the Morning Prayer ceremony was the first in over 500 years to be held on this sacred ground. It was a beautiful ceremony with singing and prayers to our ancestors and the four sacred directions. The host community honored the Maya attendees who participated in the ceremony, helping the 100 or so conference participants through an offering to our ancestors and a call from Indigenous and donor representatives to live in balance with nature and each other. It was a powerful experience made livelier by the roaming alpacas and the sacred music of Ayarachis.

At the pre-session workshop on Indigenous Peoples and security issues, the conversation bounced between the support of women in the community to frontline protectors who are fighting against technologically advanced, deceptive, and ruthless corporate and state interests. Calls for support focused on increased attention to the criminalization of rights advocacy around the developing world, greater efficacy in deploying security measures when there are considerable and authentic death threats being made, and advancing support for Indigenous systems of collective security. Barbara Savage, founder of the Tribal Trust Foundation said, “I must admit, I’m more concerned about Indigenous causes than ever before. I feel that we must collaborate in our efforts to protect and support the Indigenous people we champion. Together we will be a stronger force to advance indigenous causes. Indigenous people are on the frontline of environmental devastation and are vulnerable in standing up for human and environmental justice.”

The opening keynote by Myrna Cunningham (Miskita) was moving and charged the room with a palatable energy that carried through the final day of the event. Looking to create new dialogues and opportunities for partnerships, Cunningham said, “intercultural philanthropy is changing power relations. Indigenous Peoples, we are no longer beneficiaries. [We] are partners.” Highlighting the continued threats many Indigenous communities face daily, she delivered a message of solidarity and empowerment to the attendees asking that we collaborate towards a better future for Indigenous communities and our inherent rights. A plenary featuring Laura Cáceres and Gloria Ushigua (Sápara of Ecuador) weaved an unbelievably complex and daunting reality both of their communities have faced in response to external pressures. The session ended with a resounding chant led by Cáceres, “Berta didn’t die, she multiplied.” In a later session, Ushigua described an event where she was beaten by police because of her advocacy against China Andes Petroleum Oil. “Andes Petroleum entered our territory along with the paramilitaries. [They] consulted with other Indigenous groups, but not us,” she said.

The core of the three-day conference brought together philanthropists, donor agencies, and Indigenous communities in meaningful dialogues, exercises, and workshops around sustainable development, protecting ancestral territories and Indigenous rights, traditional wisdom and the intersection with the modern world, and successful community-based collaborative strategies with funders. Kyle Whyte, a member of the Citizen Potawatomi Nation and a faculty member of the Environmental Philosophy and Ethics graduate concentration, faculty for Peace and Justice Studies, Environmental Science and Policy, and the Center for Regional Food Systems, Animal Studies and American Indian Studies at Michigan State University, co-presented a session on Indigenous food sovereignty during the conference. He, along with many of the Indigenous representatives, was excited about making connections with other Indigenous groups doing similar work. “One of the most powerful activities Indigenous Peoples can engage in are inter-Indigenous exchanges in which we share insights about our cultures and successes exercising self-determination, as well as strategize together about how our experiences with colonialism are ultimately different, but hauntingly similar,” Whyte said.

A lunchtime conversation with two Brazilian Indigenous women helped to contextualize the lack of understanding most Indigenous people in South America have with regard to international laws and procedures. Alessandra Munduruku of the Munduruku People talked at length about the megadam projects in her community territories over the last decade. She explained that the community has been severely impacted by Brazil’s refusal to recognize their territories, opening up the area to extractive industries, megadam projects, soy plantations, and railroads. Bell, a representative of the Xingu People of Brazil, expressed her community’s dismay over the Belo Monte dam, the third largest dam project in the world. The dam caused far-reaching consequences when earlier this year two of the planned eight turbines were turned on, lowering the downstream waters and affecting traditional fisheries Indigenous communities have utilized for centuries.

Bell explained how classic divide-and-conquer strategies were used against the Indigenous communities in the region, how the local healthcare facilities have become overburdened servicing dam workers and their families, and how the Indigenous people are no longer a priority for the state services. Many communities have no concept of Free, Prior and Informed Consent (FPIC) or the United Nations Declaration on the Rights of Indigenous Peoples, and that lack of knowledge is being used by the State and corporations to exploit these communities. One of the main calls the women made on behalf of their communities was for international intervention to help secure meaningful engagement in projects affecting their communities. Free, Prior and Informed Consent must be enforced in Brazil.

While there is much to be done in supporting Indigenous rights, the 2016 IFIP conference highlighted Indigenous solutions to problems communities are facing around the world. Many of the complex problems addressed—food sovereignty, self-determination, stakeholder engagement, and the honoring of international norms—will require complex solutions with coalitions of interested partners from every discipline. If there is one takeaway from this year’s conference, it is that Indigenous people are mobilizing and connecting to the greater rights world, collaborating both with funding partners and other Indigenous communities to help strengthen Indigenous responses to the modern pressures of globalization, resource exploitation, climate change, and environmental destruction.