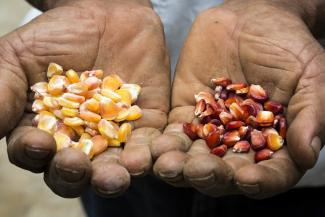 In the Seneca language, we say onëö’ge:n (pronounced oh-nay-o gan) to refer to one of our most important varieties of corn, known as Iroquois White Corn. In the English language we have the word ‘corn,’ which does little justice to the scope and depth of this extraordinary plant. Current usage of the word corn seems to evoke an image of yellow sweet corn, cattle feed, or worse yet, GMOs. I use the word corn in this article in hopes of breathing life back into the word, and to reclaim the essence of beauty and diversity this ancestral plant holds.

When I think of corn, my heart goes immediately to the songs of the place where we hold ceremonies—the Longhouse. The pang of the water drum sets a warm tone and gives rhythm to our footsteps as we dance across the wooden floor. I hear the sounds of the whoops and cries of men in beaded leggings and feathered gasdo:wä, or headdresses, and feel the heat rise from our bodies moving in unison. Meanwhile, white corn soup is burbling over the fire in a large cast iron kettle big enough to feed a hundred people. After the dances, ladles of delicious soup are poured into individual containers for all to take home. The rich broth has been boiling for hours, and I imagine the soup has been soaking in the sounds and motion of our dances. Corn soup feels like home.

Like many others, I have countless stories and memories related to corn. Each of these memories is tied to the intimate understanding that corn is more than food. Corn is a gift that has sustained communities, families, and peoples through significant periods of drought, war, flood, and fire, and it has allowed us to be here today. As part of our Original Instructions, we are taught that corn is something for which we must always be grateful in relation to the rest of creation. As Indigenous Peoples, and as a global community, the threat to local and global food systems is palpable and urgent. How do we show the cultural importance and worldview of traditional foods like corn in a time when agricultural practices, ethics, and norms have shifted so drastically?

Thankfully, others have been asking this same question. A small group of us came together in Indian Canyon, California in the winter of 2015 to dream and create a vision for strengthening our relationship to corn as Indigenous communities and as a global community. We envisioned a powerful image of corn uniting peoples across borders and throughout nations. Out of this conversation emerged two important interdependent actions. Firstly, Voices of Maíz, which has become a collective process of storytelling through images, film, and audio recordings with Indigenous corn growers, seed savers, artists, and activists in an effort to raise global awareness about the inseparable connection between seeds and knowledge. Secondly, Braiding the Sacred, an emerging network that organizes regional gatherings hosted in Indigenous communities in North America to bring people together around maintaining and practicing traditional corn knowledge. Both initiatives serve as important processes for uniting people around corn and illuminating the stories and intimate memories that give meaning to the protection of corn diversity.

Over the last year, Voices of Maíz has become a personal journey and represents a great responsibility to the teachers, family, and leaders that have helped guide this process. My worldview has irrevocably changed through the filming, in terviews, and gatherings. Starting in the beautiful farmlands of the Onondaga Nation and the clay rich fields of the Seneca Nation, to the collective plots of Tesuque farmlands, rows of short purple corn in Laguna pueblo, the endless skies of the Zuni mountains, and into the dry fields of Hopi lands, we talked to farmers, youth, cooks, and leaders, asking, “What is your relationship to corn?”

It became clear that alongside the historical and ancestral lineage that binds many people to corn, the principal relationship between farmers and corn hinges on the day-to-day bond that forms when caring for a plant that is codependent on humans for life. If you can imagine, farmers must carefully watch their corn as it grows through the many stages of development, from green infancy to the formative milky stage and onto a stage of strength and maturity. Much like a child, a farmer must protect the corn from the many potential hazards created by drought, birds, raccoons, deer, elk, and wind, to name a few, and help them to strengthen their seed for the next generation of planting.

In the hot sun of the Southwestern fields, I recognize just how resilient the corn seeds of this region have become. They persist without the most essential of resources—water. Growing up in the Northeast, we see regular rainfall and thunderstorms, and I often take for granted the availability of water. Not until I reached the cornfields of the Southwest did I understand just how to value water in all of its life giving essence. Shpeyiah Swimmer, a young friend living in Kawaik (Laguna Pueblo), grows corn in a field that extends throughout a flat dry area buttressing a set of busy train tracks. He receives water from a canal that runs alongside a strip of adjacent fields before reaching his own. The canal has been dry for the last weeks, yet Shpeyiah’s field has managed to produce rows of beautiful purple corn that reach about waist height. Shpeyiah practices a combined form of dry and wet farming by creating waffles, or 6 x 6 foot indented squares, systematically arranged in the fields to collect concentrated areas of water. He tells me about his seeds, and describes in detail how they have made it possible to farm. Shpeyiah was taught to keep the seeds strong and not water them too much so they learn how to survive without much water. As our earth continues to change, the knowledge of dry farming and the strength of seeds that know how to exist without water may very well be what keep our food systems intact.

It’s not dry farming that we must pay attention to, but rather the worldviews that give rise to these techniques of farming, seed cultivation, and cooking. This interconnected form of thinking brings into focus deep understandings of the natural law of governance, respect for more than the human world, and a sense of reciprocity that guides human behavior and maintains that we give thanks and gratitude. These important forms of knowledge are what guide the existence of diverse corn seeds. Strong messages are emerging that emphasize the need to keep planting and passing on seeds to the next generations.

In its essence, Voices of Maíz has brought forth the sort of teachings that exist in the depths of stories woven since the beginning of time. Through these stories and the power of storytelling through media, we are hoping to reach people in their most raw state of understanding through feeling. We hope to create an understanding of what it means to be in relationship to corn as an entity that has profound impacts on the wellbeing and health of people and the earth, and in doing so, create a movement toward the maintenance and protection of corn diversity. Corn exists as part of many Indigenous peoples since birth. The relationship is born again every time we plant those seeds and urge people to answer the question, what is your relationship to corn?

—Kaylena Bray (Seneca) is currently an MSc candidate in Environmental Change and Management at the University of Oxford. Formerly she was the Native Foodways Program Manager at The Cultural Conservancy.

Voices of Maíz is a storytelling collaborative project to amplify the voices of communities restoring and re-engaging the sacred in corn, and to show the fundamental role of Indigenous cultures in the creation and conservation of maize. A report, multimedia, and photo exhibition will launch at the Conference of the Parties of the Convention on Biological Diversity in Cancun, Mexico in December 2016. To learn more, visit voicesofmaiz.org. Listen to Cultural Survival’s Indigenous Rights Radio Program on maíz at consent. culturalsurvival.org/maize.