Flipping the Script: Changing the Future of Food Production in Africa 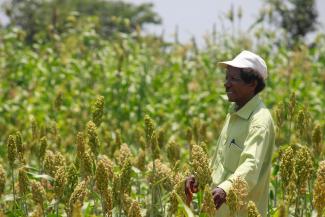 For decades, Million Belay has worked locally, regionally, and internationally to change the way people think about social, cultural, and food systems in Africa. An expert in conservation, food sovereignty, biodiversity, and Indigenous cultural rights, Belay is general coordinator of the Alliance for Food Sovereignty in Africa, in what he describes as the biggest social movement on the continent with over 40 members in 50 countries, reaching more than 200,000,000 people. In this interview, Belay explains why his knowledge-based food production philosophy (agroecology) outperforms industrial scale farming and how its implementation benefits communities economically, socially, culturally, and spiritually. 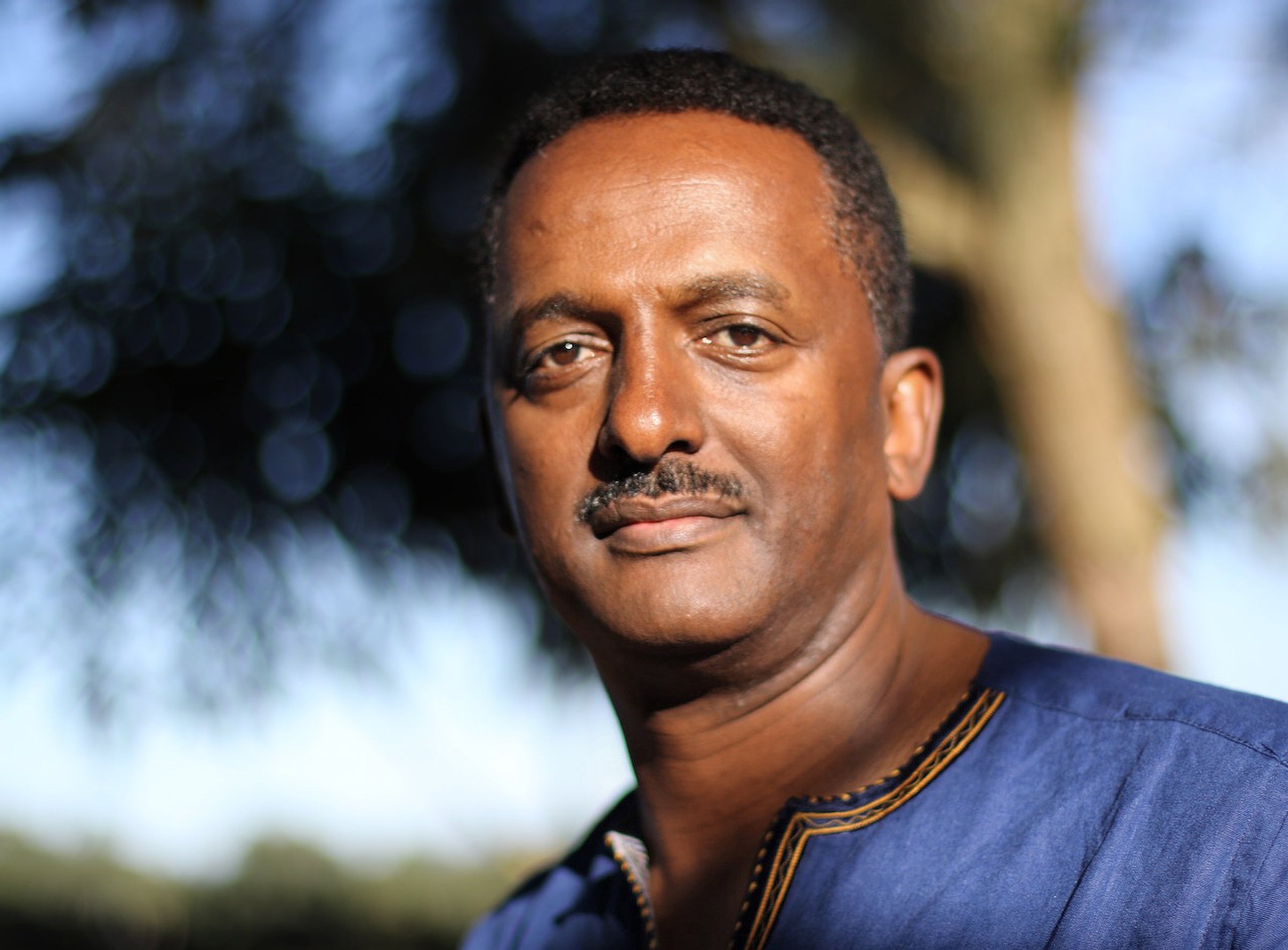 Phillippa Pitts: What is agroecology, and how is it different from large scale commercial farming?

Million Belay: I think of it in terms of a narrative. Agroecology is a different narrative than industrial agriculture. For example, how do you address the problem of increasing food production? The industrial and agricultural paradigms address increasing food production through various mechanisms, mainly using chemicals, artificial fertilizers, pesticides, and hybrid seeds. This narrative defines agriculture, especially African agriculture, as a shortage of food and a shortage of calories.

It says, “African governments and African farmers are not producing enough food, so businesses should help them.” Business comes in as a big actor. “African soil is very badly degraded and needs a lot of agro chemicals.” So, chemicals. “The seeds in the farmers’ hands are tired and not productive.” We need to bring hybrid seeds and genetically modified organisms. “What is lacking is calories.” We need to produce more calories. “Land in the hands of small farmers is not productive.” It has to be owned by those who can produce more food from it, so land should be in the hands of businesspeople. And this leads to land-grabbing. This is how the narrative is framed in industrial agriculture, and it has very powerful actors to support it. This is the kind of development that scientists, governments, and corporations all benefit from.

Now, as we know, there is a food crisis, a nutrition crisis, water pollution, biodiversity loss, and erosion of culture and human rights are compromised almost everywhere. In this kind of environment, we need a different kind of paradigm, a different narrative. Agroecology is a circular mode of production; it uses what was produced. What was produced in the farm comes back to the farm. There is no waste within the ecological system. It’s kind to nature, to the earth, and to the biosphere because there’s no use of chemicals in most cases. It focuses not on the farm itself, but on the surrounding area. It talks about the links between the farm and the consumer, the local economy, the local markets, fisherfolk, pastoralists. What differentiates agroecology from organic food culture is talking about those social movements to really challenge the way the food system is run. 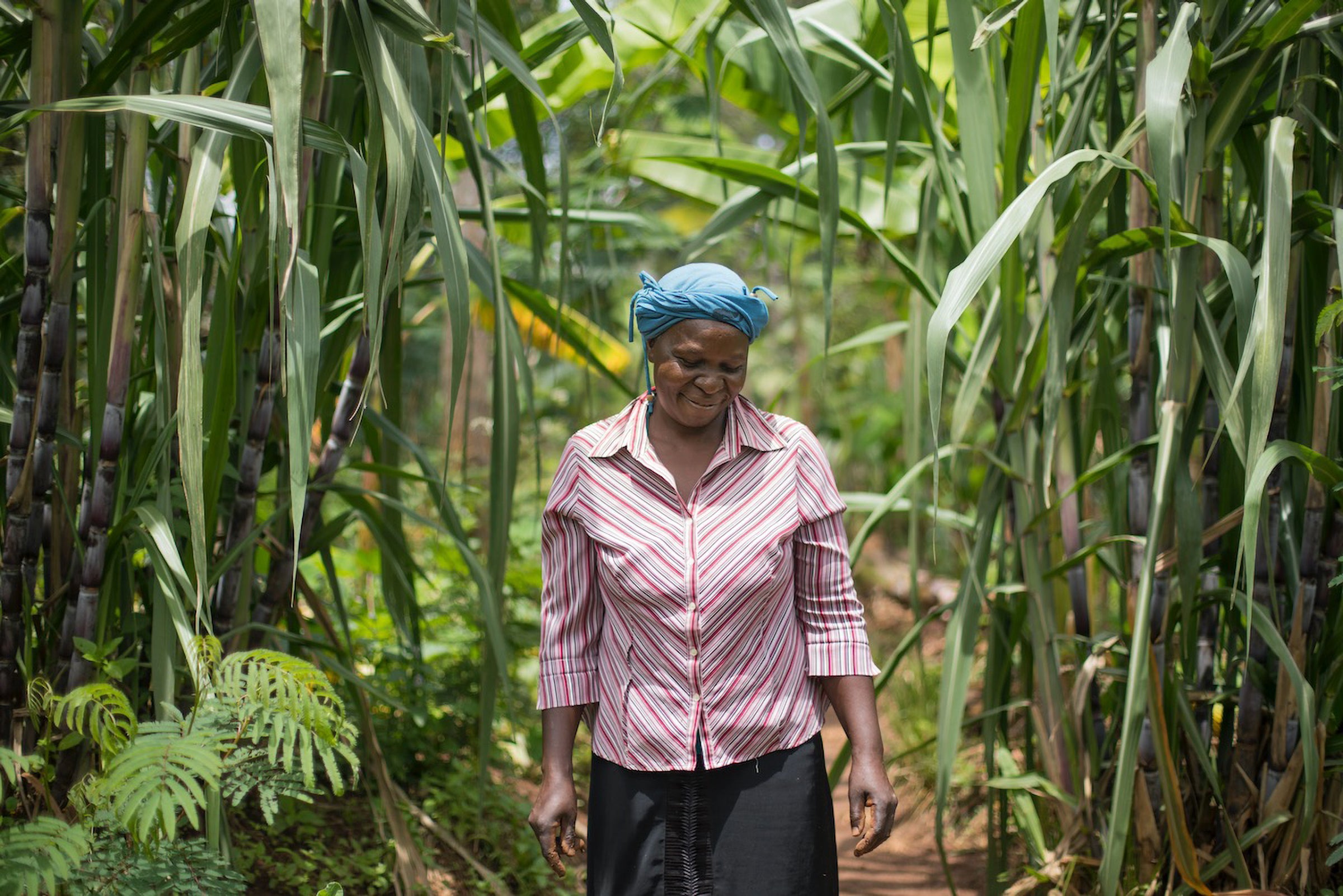 In East Africa, women are at the heart of the transition to agroecology.

PP: Could you share an example of an agroecology success story?

MB: One example is from Ethiopia. It was a project that I was involved in personally around 1996 with the Institute for Sustainable Development (ISD). The project was kind of an experiment. With the agreement of the farmers and the local government, ISD decided to look at three farms in three scenarios: one group of farmers didn’t plant anything. The second group used agrochemicals, mainly fertilizers. The third used compost and food and water conservation activities and planted green material to have enough biomass for compostmaking. The comparison was across five crops—beans, teff, wheat, barley, and maize—for over 20 years. For the first one or two years, the farmland which was treated with artificial fertilizers did well. But over the years, the land treated with compost and soil and water conservation activity did much, much better than the land that was treated with artificial fertilizer or with no treatment at all. The local government liked it so much that it was extended from three communities to eight communities, then scaled up to 93 communities, and then the whole of their region. And later, it was accepted as one of the programs of the Ethiopian government. That’s one story.

There’s a story also from Malawi from two individuals who observed that their local people were eating a very small range of vegetables with mainly maize. Their health was very compromised, so they called a meeting of women to ask them to identify vegetables that could be eaten and that they could grow. In fact, there were over 300 vegetables from the local area. They brought the majority of these plants and tried them in their permaculture farm grounds. They grew. They did really well—so much so that the community around those permaculture farms started to grow them too. And that increased income. It increased biodiversity, increased nutrition, increased health, and is very beneficial to the environment. At afsafrica.org, we have over 50 cases there. It works. And then we asked if this kind of farming could actually address the Sustainable Development Goals. Out of 17 SDGs, it addresses 12 of them. It really ticks almost all of the boxes. 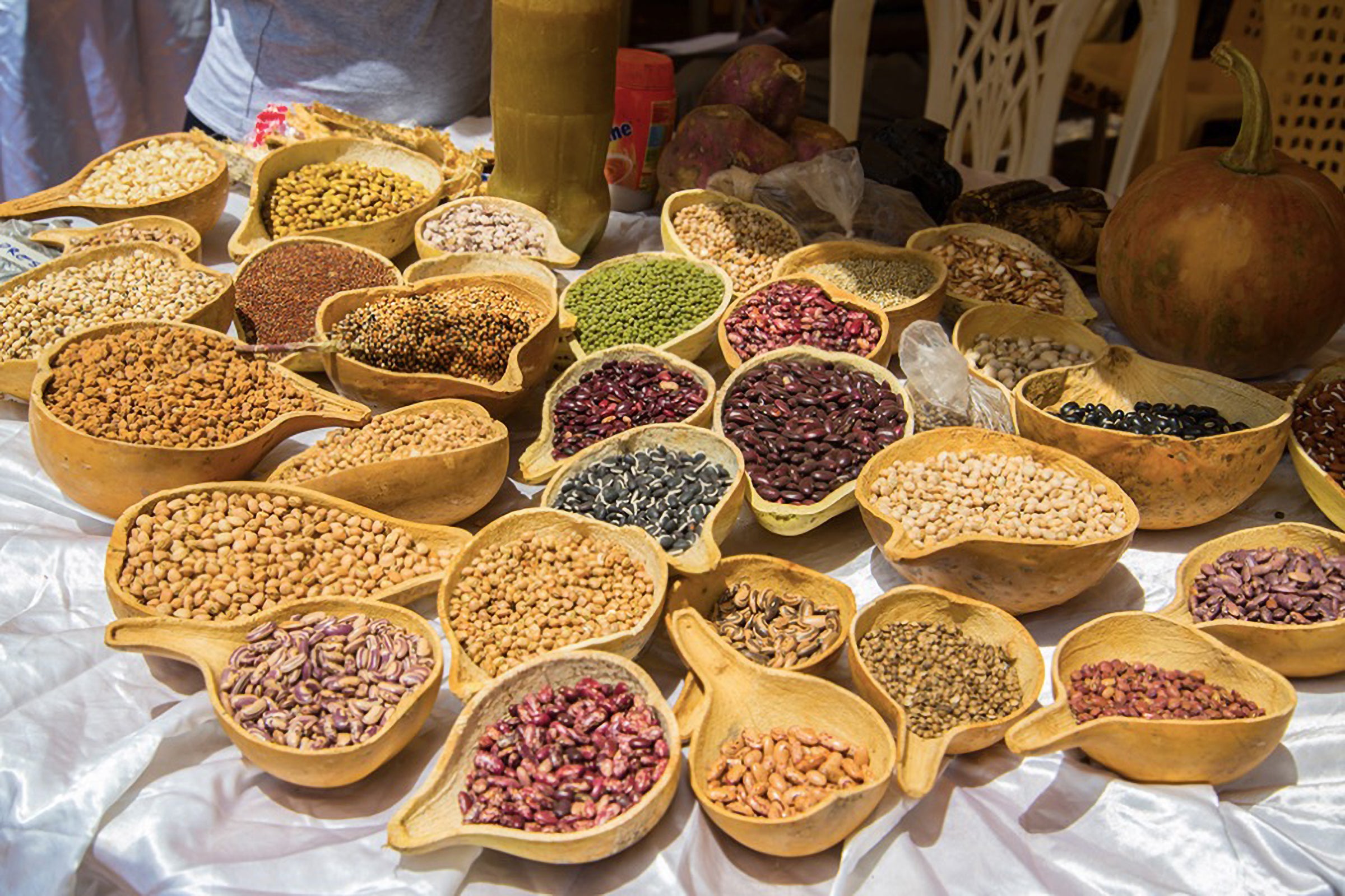 PP: How does Indigenous knowledge play into this? Is it an important part of agroecology?

MB: Food is very spiritual to a lot of communities. In some places where the land is very degraded, communities have a second land—a sacred land—that they don’t touch. These are spiritual places, but these places are also a repository of plant and animal diversity.

Knowledge about the food that you have is boundless in terms of the land, the farm, the materials and inputs used, the farming practices implemented, the animals and the labor that are used. Farming is a knowledge-based activity, and this knowledge comes from their ancestors, from the previous generations to the present generations. After the farming, there is the harvesting practice. And after the food is harvested, how is food processed? There’s a lot of knowledge in storing food, taking food out of storage, preparing it, baking it, and serving it. The range of spices that are used to store the food and process the food and serve the food, all of that is knowledge, and women’s knowledge is the basis of it in so many communities.

Local communities will not give you the scientific name for microbes or abstract knowledge of fermentation. They won’t tell you that when yeast acts on a carbohydrate, alcohol and carbon dioxide and water are produced. But they know that fermentation occurs and what level of yeast to use. Traditional learning as a topic is huge, and the level of erosion of cultural knowledge is so high. One of the main reasons is the breaking of relationships between cultural elders and the new generation. People used to govern their relationship with each other and with their environment in their cultural way, but that is eroding. My projects aim to link the two generations. That link is a very important thing. 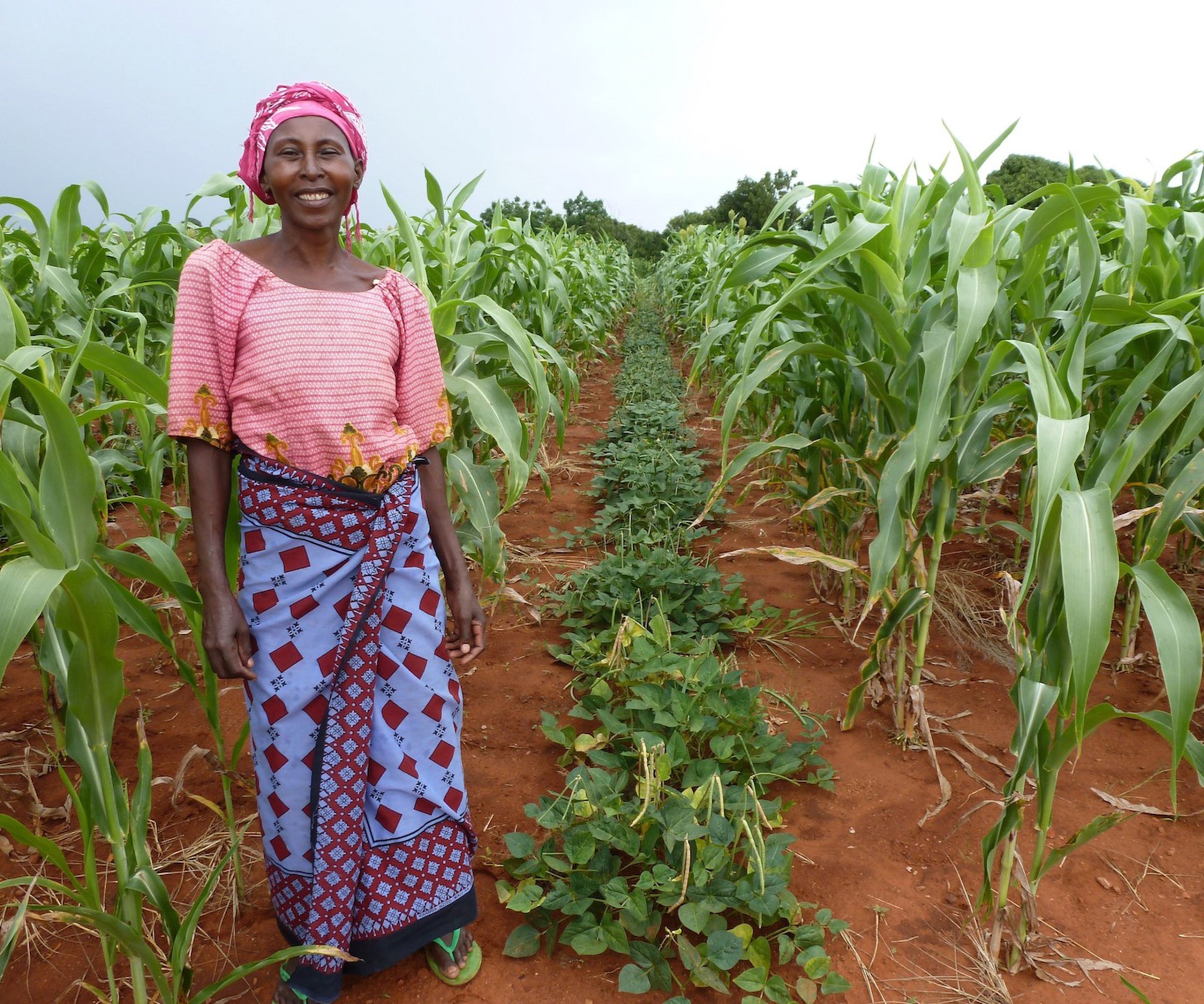 PP: What needs to happen to ensure this knowledge isn’t lost and that these initiatives can take hold? What should people be wary of?

MB: Everywhere you go, people talk about transforming the food system. Everyone talks about using COVID as an opportunity to transform the food system. But what you don’t find in those narratives, in those conversations, is culture. Even in the spaces where you would expect that people know about these issues, it’s not mentioned. One thing that we should do is bring that culture into our discourse as much as possible. That’s why we love to talk about food sovereignty. One of the key differences between food security and food sovereignty is the cultural appropriateness of food. What does it actually mean when we say that food should be culturally appropriate? It has to recognize the value that our mothers place on food and their knowledge about food, food processing, food storage, even food serving. That’s cultural knowledge, because the way food is prepared by somebody in Latin America, or somebody in Africa, even in different African countries, is different. 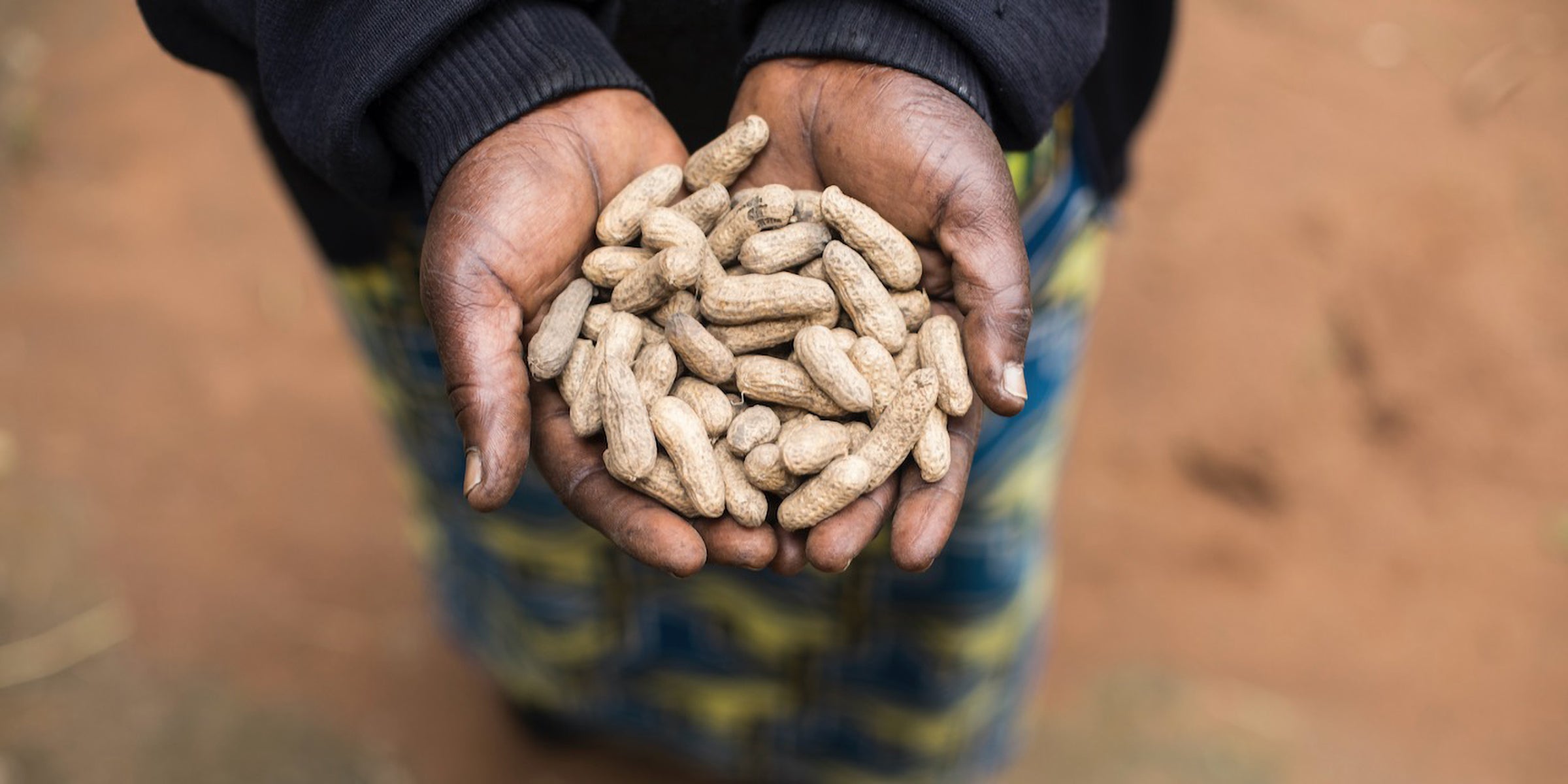 Second, everybody talks about youth empowerment and bringing youth to agriculture. But we have to connect the two generations with intergenerational learning. There are so many ways of bringing youth to their culture, in not boring ways. The Indigenous and Conserved Communities Area Consortium are trying to integrate the cultural diversity of these concepts into key international processes. Indigenous institutions all over the world are trying to do that too.

We have to organize celebrations as much as possible. As the Alliance for Food Sovereignty Africa, we have them every two years. This year, because of COVID, we are thinking of organizing virtual celebrations around food culture as much as we can. In Ethiopia, South Africa, Kenya, Tanzania, Benin, Togo, what happens is we meet with the schools and youth groups and we ask them to come somewhere with their diverse seeds. They exhibit their seeds in so many creative ways, with their cultural dances and attire, musical instruments and music.

Over the years, we have had fantastic examples of a song that was forgotten by a community, then sung by the youth; a kind of poetry, which was part of the culture of the local community, that comes back through the youth going back to their culture, digging into their stories and bringing them back. Seeds that were considered lost are exhibited by the youth and coming back. Songs, clothing. . . Christianity has contributed to the degradation of our culture. We know we’ve lost a significant amount of these cultural practices and these spiritual practices. But if you go back to your own communities and dig out some old celebrations and ask people, you would be surprised what comes out.

All photos courtesy of Alliance for Food Sovereignty in Africa.

44-3: Back to Our Roots: Indigenous Food Solutions 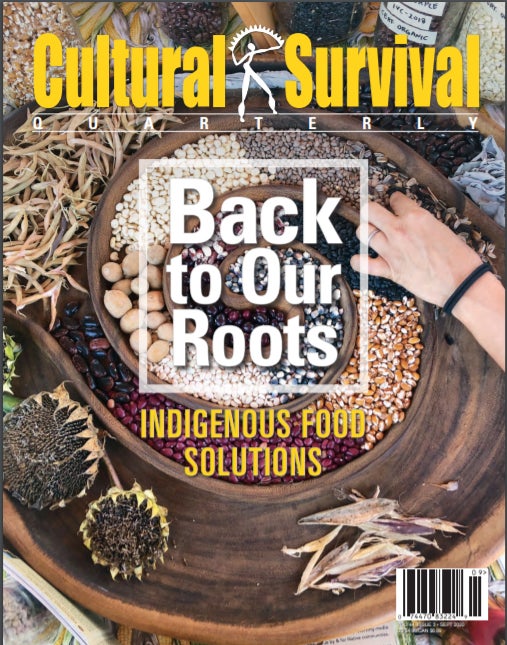